Don 1, The King From Queens: The Life and Photos of a NYC Transit Graffiti Master 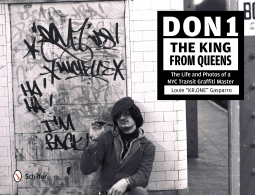 
Among the famous graffiti artists from New York City’s 1970s subway era was an unassuming talent from the unassuming borough of Queens. The Italian-American rock and roller who wrote “DON 1 MAFIA” blasted onto the scene like a meteorite out of nowhere. His influence on this art form transcended the inner city and he became a legend and a household name. But his descent from the top of this name game, a result of the hedonistic lifestyle of New York City at the time, was just as swift, and for years DON1 has lived in obscurity.

Fortunately, as a photographer studying at the prestigious school of Art and Design, DON1 documented his iconic work, along with that of his well known contemporaries, using his trusted 35mm camera.

This penetrating work takes the reader inside the supernova that was DON1′s creative life with nearly 200 never before seen graffiti photos of the most undocumented NYC train lines and an even rarer glimpse at work from his black book.

Graffiti being seen as a pure art form can sometimes be a bit of a divisive thought but I certainly agree because of the fact that I have seen some truly pitches of art by the graffiti artists out there.  Obviously one of the most famous on the scene is a man called Banksy but Don1 is one of those unsung heroes of the scene.

During the 70's, his art and tagging work was one of the most famous sights in the city of New York.  No matter where you went on their famous transit system, you always seemed to find at least one bits of his work.

Here, Schiffer have crafted a great look in to that world.  On one hand you have a great look in the New York City in the 1970's.  A decade that was full of contradictions.  On one part, it was a decade of glitz and glamor and on the other part, it was a gritty and grimy decade too.  That's all on show here.  The photographs here have been very well picked and really do a great job of both showing off Don1's work as well as the gritty beauty of the city itself.

While also being a good look in to the 1970's NYC, this is also a fascinating look at the life of a graffiti artist.  I really liked the fact that it wasn't written as if the artist was perfect.  Far from it.  Yes, the artist was proud of his reputation and of his work but at the same time, it was nice to see an art book that didn't make the person involved seem perfect and infallible.

The personal touches in the book, especially in the stories behind why he got involved in the scene to begin with, were very well written and really gave you an interesting glimpse in to his life and motives.  At the same time, it also felt good to put a personality to the work so to speak instead of just being an unknown tagger or artist.

All in all, if you are interested in art whether it be the urban art of the graffiti world or even just interested in the motives why an artist does certain styles of work, then this is a really good addition to your library.