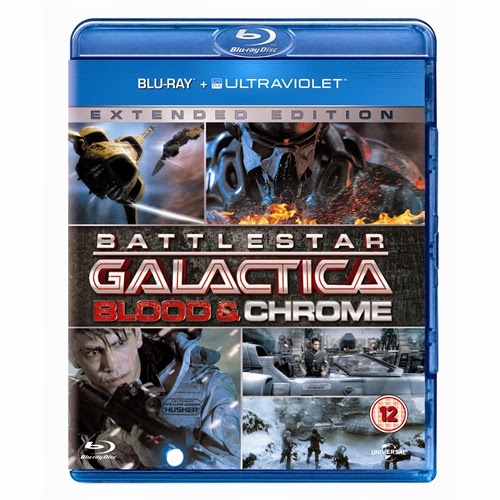 Based on Characters Created By
Glen A. Larson
Michael Taylor
David Eick

An all-new chapter in the Battlestar Galactica saga, Blood & Chrome takes place in the midst of the first Cylon war.

As  the battle between humans and their creation, the sentient robotic Cylons, rages across the 12 colonial worlds, a young, talented fighter pilot, William Adama (Luke Pasqualino, The Borgias), finds himself assigned to one of the most powerful battlestars in the Colonial fleet: the Galactica.

Though Adama quickly finds himself at odds with his co-pilot, the battle-weary Coker (Ben Cotton, Alcatraz), the two men must set their differences aside when a routine escort mission with an enigmatic passenger (Lili Bordan, Silent Witness) turns dangerous and becomes a pivotal one for the desperate fleet.


As a fan of both the original series and the remade one, I've really like a couple of the spin off movies that have come with the new series.

When the SyFy channel said  that there would be an Internet mini-series showing the beginnings of the legendary Adama's career, I was a bit worried that they wouldn't be able to do the idea behind it justice.  Obviously with it being an Internet series, the budget was going to be a lot lower than on the show itself and when a show like 'BSG' prided itself on how good it looked with it's effects, I was worried that the lower budget would fall at that first hurdle.

However, that was a pleasant surprise.  While there were a couple of scenes that struggled slightly due to the budget, for the first part, it looked absolutely fantastic and wouldn't have looked out of place in the full series.  The great effects work was the most evident in the battle scenes and in the scenes involving the Cylon's themselves.  The older version of the Cylon's look positively brilliant, battle weary and you can definitely see how they would go on to evolve in to the ones the fans of the new series are familiar with.

Casting wise, I think they did a pretty good job with the people used here.  Luke Pasqualino does a great job of managing to mirror the older Adama's mannerisms and character yet at the same time, does really well to put his own spin on it.  It's true that his performance didn't match that of  Olmos' but at the same time, I wasn't really expecting it to.

Lili Bordan, was an actress that I wasn't all that familiar with but she gave a great and enigmatic performance here as the mysterious passenger that Adama and Coker have to take on a passenger trip.

Story wise, I really liked how this one filled in some of the blanks about Adama's early career and how you got to see how he became the legendary man that the fans know and respect.  There were a couple of moments where for me as a fan, that didn't quite gel but I found myself really enjoying it.

The one disappointing part of the release that I found was that there wasn't really all that much in the shape of the special features.  I would have loved to have seen some more behind the scenes stuff or maybe even a little bit on why they decided to go the Internet route with this one.  That's just a minor complaint on my part however.

All in all, I think 'Blood & Chrome' does a really good job of fitting in well with the 'Battlestar Galactica' canon and as a fan, it was nice to see some of Adama's early life and how he turned in to the man the fans know from the new version of the series.