Aim For the Head: An Interview With K. Michael Gibson 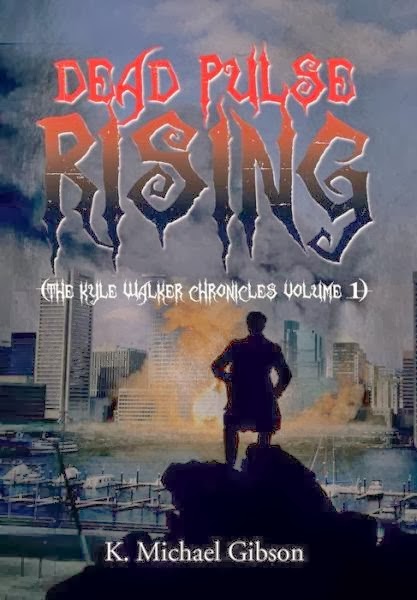 K. Michael Gibson, author of the superb ‘Dead Pulse Rising’, has kindly taken the time to pop in to COASM to talk to Patrick Scattergood about his book, his influences and about a very generous campaign he is running for the soldiers overseas.

PS:  Firstly, thank you very for taking the time out to chat to us here today.

KMG:  Thanks for having me Pat.

PS:  What would you say has been the biggest reason for you becoming a writer?

PS:  A writer can find inspiration from a great variety of sources. What would you say inspired you to write ‘Dead Pulse Rising’?

KMG:  Well, I’ve always been a huge fan of horror in general, from comic books as a kid to George Romero’s zombie flicks from back in the day. Ever since seeing Night of the Living dead I was hooked on the genre. Now I’ve seen and read many, many zombie novels and movies over the years and they’ve always tended to turn out the same way. So I wanted to write something different.

PS:  How would you say that your novel differs from the other ones out there in a similar genre?

KMG:  In most stories of the zombie genre things tend to end up pretty much having the same old song and dance, there’s an outbreak of this zombie causing disease from either a virus or space radiation or whatever the cause may be and the world ends up for lack of a better word, dead. In the aftermath there’s a small group of survivors left to fend for themselves, and of course there always seems to be another group that wants what the other has. This is where ‘Dead Pulse Rising’ goes off the reservation. I wanted to write less about all out survival and more about the individual, this story is more personalized to the characters, I try to convey as to why each individual character chooses the path they choose. More or less I wanted to blur the line between the protagonist and antagonists of the story.

PS:  You are currently running a campaign where for every hardcover version of your book sold, you will donate an e-book copy to a soldier that wants one for free. Where did this idea come?

KMG:  The idea to run eBooks for soldiers was inspired by several sources, one working in law enforcement as I do even now, I work with a lot of retired and active military personnel and I’ve heard a lot of the stories they bring back with them. I’ve also seen the mental and physical effects combat can have on a person, so I wanted to help offer some of them a bit of a break from the day to day by delving into reading which soldiers have been known to do during their down time. I’ve also encouraged other Authors and readers to join me in my efforts and donate their own works or used books to organizations such as http://booksforsoldiers.com/ or Operation Warrior Library to name a few.

PS:  Who would you say has been the biggest inspiration to your writing career?

KMG:  I would have to send that honor out to my family. They give me all the inspiration that I need.

PS:  When you write, do you have any quirks or traditions that you partake in?

KMG:  I do, typically whenever I start a book my wife and I like to find a cabin out in the middle of nowhere, get a roaring fire going, sit down with a pot of coffee and start to work. I pull out my laptop and an old fashioned dictionary and thesaurus and my wife works on her cross stitching. Where the ritual part comes into it is I like to finish out the book in the same fashion.

PS:  Where do you see your series of Kyle Walker books going next?

KMG:  Well, not to give too much away, but things are going to get a lot darker for Kyle in the upcoming series.

PS:  You are known for being personable with your fans. What kind of advice would you give the writers amongst them?

KMG:  Get to know the people that are reading your stories, don’t be afraid to ask their opinion about what it is they want to read.

PS:  Since ‘Dead Pulse Rising’ was published, what would you say has been your proudest moment?

KMG:  The first time someone read it and said, “Okay punk I’m hooked, when’s the next one?”

PS:  What can your fans expect from you next Mr Gibson?

KMG:  Well, The Kyle Walker Chronicles is only one of the series I’m currently working on. Another completely different series has been on my mind for some time as well as a historical fiction novel I’ve brewed up.

PS:  Thank you very much for taking the time to speak to us here today.