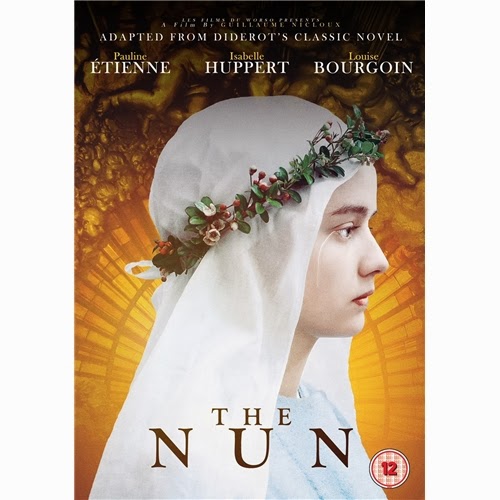 Based on the Novel By Denis Diderot


Guillaume Nicloux directs this French-language adaptation of the novel by Denis Diderot. The film follows the fortunes of Suzanne (Pauline Etienne), the child of a wealthy family who is committed to a nunnery against her will. When informed by her mother Simonin (Martina Gedeck) that she is an illegitimate child, the reasons for her internment become clear to Suzanne: to ease the financial burden on her cash-strapped family and to alleviate her mother's feeling of having 'sinned' by giving birth to her.

Suzanne's woes are multiplied by first-hand experience of the corruption and impiety of the church. Viciously abused by Supérieure Christine (Louise Bourgoin), Suzanne attempts to escape her plight through a series of letters begging authority figures to intervene and have her vows annulled. Will she manage to break free?


I am an incredibly big fan of foreign movies over Hollywood movies because of the fact that I just simply seem to enjoy them a lot more in that a lot of the time there seems to be more effort put forth on the story rather than the special effects.  I suppose in a way that approach makes for a nice change than the explosion and special effects heavy movies that seem to be released every other day in to the cinemas.

Here, this movie couldn't be more different from those ones in that it's a slow burning, very grim in places look at the psychological side of religion and in particular, how being forced in to a religious setting can affect someone.

The slow moving nature of the movie itself may put off some people from sitting down to watch this French drama.  That would be a real shame and those people would be missing out on a real gem of a movie.

However good the writing and the settings are, that would most definitely be all for nothing if there wasn't a strong cast to back that up.  Now I know that this is based on a novel, although I will readily admit that I haven't read that, but here the writing is intelligent to the point that it really lets the cast grow as the movie movies along.  That's the truest with the performance by Pauline Etienne.  I can honestly put my hand on my heart say that I am sure that her portrayal of Suzanne Simonin is a star making one.

After seeing the portrayal here, Etienne is one of those names to keep an eye out for.  In fact, when I saw her name on another movie then I would pick it up and watch it based on her performance here as well.

The rest of the cast do an utterly superb job with the dialogue and the subtle nature of the movie itself.  A lot of the credit there must go to the director, Guillaume Nicloux.  I've not seen any of his movies before but his steady hand and great eye for detail really make this movie one that will hook you in for the entire run time.

I'm not going to lie and say it's a perfect movie because it's not by any stretch of the imagination.  There were a couple of moments that seemed a little bit out of place.  Not in a massive way but they seemed to be a little under explained when compared to the rest of the movie.  Maybe that's because of the fact that the rest of the movie seemed such a high standard of writing that there would be a little bit of give or take.

While this may seem like a heavy duty and quite grim movie, which it is in a couple of places, this is one of those movies that it is really worth taking a chance on and sitting down to watch.  There are some truly brilliant performances here, especially in the shape of a possible star making performance by Pauline Etienne.  I really can't recommend this movie high enough.  I couldn't take my eyes off of the screen for the entire movie and couldn't wait to see how the characters would grow as the movie moves on.