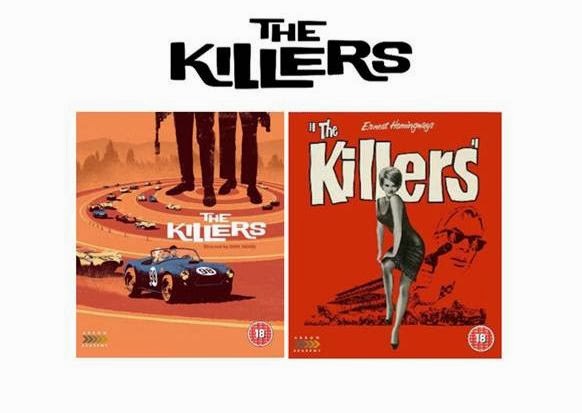 
There is more than one way to kill a man...

"I gotta find out what makes a man decide not to run.  Why all of a sudden he'd rather die."

Loosely inspired by the Ernest Hemingway story, and directed by Don Siegel (whose many other taut, efficient thrillers include Dirty Harry and the original Invasion of the Body Snatchers), The Killers was commissioned as the very first 'TV movie', but was given a cinema release because of its violence - although a cast like that really belonged on the big screen in the first place.


Give me a film noir or a movie about hitmen and I am a very happy movie nerd.  When you couple that with this, a movie that was intended to be the first ever television movie, a cast of some of the best actors and actresses of the era and directed by one of the best directors of the decade and you have one fantastic and classic movie.

'The Killers' ended up being released in cinemas instead of being shown on television because of it's high level of violence.  That said, a movie with a cast this good deserves to be on nothing other than the big screen.  A lot of the scenes here come across as a pure masterclass of acting and how to be subtle all while there is mountains of action around them.

Here Don Siegel has directed  a pure and utter classic movie of the 1960's that signaled the end of the Bogart / film noir era.  It not only signaled it with a massive increase of violence but also with harder hitting stories and grittier writing.  That's definitely evident here.  The movie comes across as both a full blown hitman movie, which should please the classic action movie fans out there, but also as a pure character driven movie showing that not even people paid to commit murder are completely immoral.  You really see the many layers of the characters here, especially that of Lee Marvin's character named Charlie Strom, who as the movie progresses, begins to not only doubt himself but also starts to drive himself crazy trying to get to the bottom of the mystery surrounding his 'target'.

Talking of Lee Marvin, this movie really sets him apart from the rest of the cast because of the sheer strength of his performance.  While the rest of the cast are really good, Marvin just stands head and shoulders above them all.  I strongly believe that this is the movie that really set his journey in to becoming one of the coolest character actors of the 60's and 70's.  The seeds for his transformation in to one of the best actors of his generation most definitely started here.

Viewers will also get a bit of a kick out of seeing the future American President Ronald Reagan in his last movie role as well.

Once again, Arrow Films have crafted a fantastic release of a classic movie and filled the Blu-ray with some superb special features.  One of the massive strengths of Arrow Films is that they always manage to find things that even long time fans of the films they release may not have seen before.  That's the case here as well.  There were loads of behind the scenes bits and pieces that were so interesting to a movie nerd such as myself, especially the interviews.  I'm a sucker for a good interview and the ones here are fantastic.

Here, Arrow Films have released, yet again, an absolute classic movie and then give us fans some brilliant special features that will interest everyone from the hardcore fans to people that just want to see what the much lauded movie is about.

Definitely a movie well worth getting.