The Boy With the Porcelain Blade Review 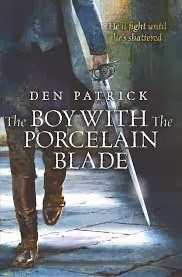 
Lucien de Fontein grew up in isolation in the Kingdom of Landfall.  He is a talented fighter yet constantly lonely, tormented by his deformity, and well aware that he is a mere pawn in a political game.

Ruled by an insane King, this is a world where corruption and decay are deeply rooted...

The Boy With the Porcelain Blade takes place in an original and beautifully imagined setting, populated by unforgettable characters.

An ornate yet dark fantasy, it has echoes of Mervyn Peake, Robin Hobb and Jon Courtenay Grimwood.


Touted as one of the most original fantasy debuts in recent years, this book has a lot of publicity and hype surrounding it.  I'm always a bit wary when a book has so much surrounding it because it inevitably doesn't live up to those slabs of hype.

Well, for once, this is definitely one book that not only lives up to the hype but also hooks you in to such a degree that you want to get your hands on the next part straight away.

I wasn't all that familiar with Den Patrick but after reading this, he is definitely a talent in the fantasy genre that is well worth keeping an eye on.

Here he has set forth in a world that not only already feels fully formed but also feels completely alive and realistic.  You can honestly just get lost and even go so far as to imagine yourself in the world.  The sheer strength and pacing of the writing does a brilliant job of making this novel in to a complete page turner.  As a reader, I was completely hooked in to such a degree that I sped through the book because I didn't want to put it down at all.

For a debut book, this is one of the best in the fantasy genre that I have read in a really long time.  If you are a fan of authors such as Robin Hobb, which is a great comparison, then this is definitely a book that you should pick up.  As the beginning of a series, this is  a definite title that will get you hooked in and eager to see the other adventures that Patrick will set these characters on.