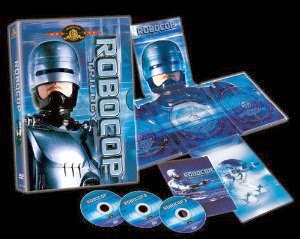 
He's RoboCop. And in the near future, he's law enforcement's only hope. A sadistic crime wave is sweeping across America. In Old Detroit, the situation is so bad a private corporation, Security Concepts, Inc., has assumed control of the police force. The executives at the company think they have the answer - until the enforcement droid they create kills one of their own. Then an ambitious young executive seizes the opportunity. He and his research team create a law enforcement cyborg from the body of a slain officer

All goes well at first. Robocop stops every sleazeball he encounters with deadly, piercing, and sometimes gruesome accuracy. But there are forces on the street, and within Security Concepts itself, that will stop at nothing to see this super cyborg violently eliminated.

Prepare yourself for non-stop action and adventure in one of the most explosive sci-fi stories you'll ever witness: Robocop.


The sizzling sequel to 1987's sci-fi blockbuster brings back "The Future of Law Enforcement," Robocop, to face his greatest challenge ever! Peter Weller returns as the half man/half machine police officer, this time to rid the lawless streets of Detroit of the deadly new designer drug "Nuke." Unknown to Robocop, the evil corporate empire which created him wants to take the city "private," and develop Robocop 2, a newer, bigger and more powerful version to replace the original.

The script was - in part - written by comic-book genius, Frank Miller (Ronin, The Dark Knight Returns).


Omni Consumer Products (OCP), the conglomerate that designed Robocop now owns Detroit. The company plans to demolish one of the city's largest neighborhoods to build a gleaming city of the future-after an army of ruthless mercenaries finishes throwing everyone out of their homes.

But Robocop, sworn to protect the public, joins forces with a band of urban freedom fighters battling to save their neighborhood. After battling a lethally efficient ninja android, and equipped with a new arsenal of hi-tech weaponry, Robocop and the courageous residents take on OCP's private army. It's all-out war, an explosive street fight that could destroy either the entire city or the evil powers behind the brutal corporate raid.


With the remake currently in cinemas dividing fans of the original movie, I figured that now would be a good time to return to the originals and see how they stack up today.  So. dead or alive you are coming with me.

The first 'Robocop', directed by Paul Verhoeven, is an action packed yet hilariously satirical look at the rising crime and  greed of the 1980's.  I've never been that big of a Verhoeven fan other than with this movie and 'Starship Troopers', but this is most definitely some of the best work that he has ever done.

The mix of action, science fiction and satire work really well together.  They end up having you both on the edge of your seat as you experience Murphy's journey in to becoming Robocop but also laughing until you cry with some of the jokes that come flying off of the screen  in amongst the various body parts.

This is most definitely the Peter Weller show however.  In the hands of anyone else, the role of Murphy and Robocop could have been riddled with action movie cliches and would have had next to no depth, as evidenced by the performance in the third movie of the trilogy but I'm ahead of myself here.  Weller gives the character such an emotional slant that you actually care about what happens to him and even root for him throughout the movie.

That's not to say it's a bad movie.  It's really not.  It's an enjoyable movie for the most part but it just lacks the depth of the original.

The set pieces here are absolutely action packed here and the special effects have actually aged really well when you consider just how old the movie actually is.

Peter Weller once again reprises his role as Murphy and Robocop and again rules the movie with his superb performance.  There's slightly less chance for emotional moments in this movie as it is pretty 'balls to the wall' for the most part but Weller still gives such a good performance that you can't take your eyes off of him.

However, that quality goes massively downhill with the third installment and it's easy to see why.  While the first two movies were serious  looks at crime, punishment and greed albeit with satire lashed over the top of it, this third movie comes across as little more than a limp parody of those movies.

There is no satire at all and the looks at the violence of action movies are completely washed away here.  Instead, the action descends in to slapstick on more than once occasion and that really jarred me.  Also, without Weller, the character of Robocop comes across as little more than a tired science fiction cliche.  It was Weller's performances that gave the character the multiple layers that it need to raise it above the pitfall of other such movies.  Here Robert Burke is the man that dons the suit and he just doesn't do the character justice at all.

All across the board the performances here range from being awful to being massively over the top and melodramatic but not in the well handled way of the first two movies.  There were so many groan worthy moments that I ended up feeling glad when the movie ended as I felt so disappointed by it.

All in all, this is a very good set.  Sadly the collection is let down by the really poor third movie that pretty much ignores everything that the first two movies set in to motion.  That said, this set is well worth getting for the legendary original 'Robocop' movie as well as it's slightly less successful but entertaining sequel.  The third one is one that's worth missing though.