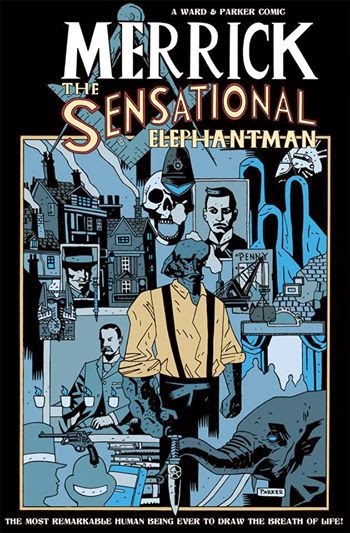 
Merrick: The Sensational Elephantman is a Victorian adventure/horror/cape gaslamp comic set in 1880s' London. Based on a fictional version of the life of Joseph Merrick, it steps between historical facts and turn of the century folklore juxtaposed with the American superhero comic conventions of super powers, masks, secret identities and fantastic adventures.


I have to admit that when I saw the cover for this I thought that Mike Mignola had come out with another comic book but I was wrong.  The art styles are similar on the surface but there are many little differences to tell the two apart but we're getting ahead of ourselves here.

I've always been interested in seeing and reading stories about Joseph Merrick, better known as The Elephantman.  The tragic and short life that this man lived has gone down in the stuff of legend and therefore has been the inspiration for many movies, books and even comic books.

Here, the character makes an appearance in a new comic book series written by Tom Ward.  I must admit that I was a little hesitant at first with this one purely because of the fact that there have been  so many stories featuring the character that I really wasn't sure what they could do with him that hadn't already been done a hundred times before.

Well, I have to admit when I'm wrong and I was very wrong with this one.  I loved this first issue and it really does a good job of setting up the rest of the series.  In a couple of reviews that I've read about this first issue, they've picked out that the relationship between Treves and Merrick isn't fully explored and that you only see the villain of this story told in Merrick's flashback.  I think that's a bit of a pointless complaint if I'm honest because this is only the first issue so obviously they're not going to throw every single bit of revelation in to the story straight away.  That would be silly in that it would leave nothing else for future issues.

In my opinion, I really enjoyed the story for this debut issue.  It moved along at a cracking pace and has made me massively eager to read the next part of the story.  The fast paced writing of Ward really throws you in to the story and leaves you wondering just where the story is going to be taken next and you can't ask for more than that can you?  I'm looking forward to the second issue so I can see just what exactly left Merrick hurt to that degree, to see more of the villain revealed and to explore more of the relationship between Merrick and Treves.  If this issue is anything to go by then there are going to be some great twists and turns in store for the readers in future issues.

Art wise, there is a most definite Mike Mignola inspiration in Luke Parker's work and that is both a massive strong point but also a bit of a weakness too.  It's a strength because the art really stands out and really makes the Victorian setting come to life.  They also really make the look of the characters memorable.  However it's a weakness because if you aren't a fan of the Mignola style of artwork then you may be a little put off by the art here and that would be a real shame because you would be missing out on a quality comic book.

As a debut issue, this one has definitely grabbed my interest enough to want to get my hands on the next issue and that's pretty much the job a first issue needs to do isn't it?  The story is fast paced, you learn enough of the characters to want to see more of them explored in the future and you can't ask for more than that from a debut can you?

You can download the first issue for free from here!

You can also pledge to their Kickstarter campaign here!
Posted by Pat Scattergood at 10:11