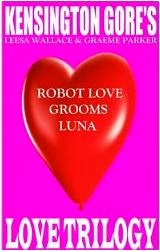 
In Kensington Gore's Love Trilogy the novella length stories are:

GROOMS - is a gay love story with a dark, comedic twist. It's a funny parody of those dark, satanic, "Wicker Man" country villages that we all fear being stuck in.

Bob & Terry, a recently married couple, go on their honeymoon to the seemingly quiet, quaint seaside village of Much-Humping-On-Sea.

However, it turns out to be the honeymoon from hell that goes from bad to worse. Eventually, it turns into what could be a deadly witch hunt!

As usual with Kensington Gore's Twisted Tales, there is a twist in the tale that shows even in this homophobic world, things might not be as straight as they first seem.

This novella length story by Kensington Gore is controversial and not PC.

ROBOT LOVE - Is set in the year 3000, men are obsolete and women are in full control.

Women are now waited on hand and foot, day and night, by fully functional robot men. That must serve their woman, please them and pleasure them.

But then something changes, love comes off the production line.

Will love conquer all? Will man survive?

"This is not a feminist story. This is a love story about the death of men, real men."
Kensington Gore
LUNA - Is a love story of epic proportions, that brings the moon and sun into focus and releases the animal desire and lust within us all.

Luna, is a young, beautiful but mysterious woman, who is being held captive and tortured with scientific tests to reveal her powers and secrets.

She finds love in this most unlikely of places with Sol, the son of her captor. Sol is the only light of her life.

This story, with its perfect blend of fantasy and horror, proves to be a very dark love story that shows Kensington Gore's twisted tales are going from strength to strength.


As everyone who visits this site knows, we're big fans of the series of stories called 'Kensington Gore's Twisted Tales' here.  Then his stories did their best impression of a bus.  We're waiting for another story and three come along at once in the shape of 'Kensington Gore's Love Trilogy'.

Well, with Valentine's Day out of the way for another year, there's still love in the air so I picked up this site and was wondering just what kind of love Mr Gore himself would be writing about.

We have 'Robot Love', which is a great satire set in a world where men are obsolete and women are in charge.  Men are just there to make up the numbers and in a story like this, it's so well written that on one page you will be howling with laughter and then on the very next page you'll be sat there shocked and waiting to see what will happen next.

We also have 'Grooms', which in this day and age of apparent tolerance and homophobia, 'Grooms' is by far the best title in this set.  That's not to say that the rest are poorer stories because that's massively far from the truth.  'Robot Love' and 'Luna' are utterly superb stories, it's just that this one is one of the funniest, most touching and kind of freaky tale that I've read in a long time.  It's definitely one of the best of Gore's stories by far, if not the best.  This is a tale of love, of wicker men and much more in this multi layered and well paced story.

Also in the trilogy we have 'Luna', a love story revolving around a werewolf.  Another one of Gore's stories written with Leesa Wallace along with 'Robot Love', shows just how great a partnership they are when it comes to writing these stories.  Once again, they've knocked one out of the park and show that you can mix horror, romance and humor without resorting to having sparkly vampires and werewolves that have to take their tops off for no reason.

All in all, this is an absolutely brilliant set.  It's at an incredibly low price and you are getting three positively brilliant stories that have great pacing, memorable characters and are delightfully un-PC.  Equal parts horrifying, touching and heartfelt, these are stories that are definitely worth picking up.