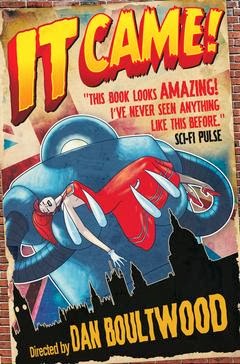 
A robot monster from Mars (possibly) has arrived in England's pleasant pastures, bringing giant knuckle sandwiches of exotic metal to the land of crumpets and bunting.

Doctor Boy Brett - pipe smoking astroboffin - and his skirt-wearing sidekick, Doris Night, are all that stands in the way of this cosmic colossus - two mortals trapped in a war of the worlds, challenging the unearthly fury of cosmic entities gone mad!

Prepare to have your stockings laddered by a terrifying battle of wits, shock full of thrills, from B-movie maestro and professional cad, Dan Boultwood!


I've always had a major soft spot for the cheap and low to no budget B-movies that I grew up watching and still watch now.  The sheer level of cheese and fun in these movies never fail to cheer me up and make me smile no matter how bad the movie is.  The sets that look like they're going to fall over, the costumes that look like they're made of rubber and tin foil, the monsters that look like they've been made out of cardboard.  That all adds up to being a lot of fun to watch.  At least for me anyway.

Here in 'It Came', Dan Boultwood has captured that sense of fun, of cliches that make us laugh and the low budget humor that makes those sorts of movies so beloved.  He manages all of this while creating an undeniably affectionate pastiche of all things dorky.

One of the things that these sorts of titles normally fall down on is that instead of being an affectionate look at the things that make the B-movie popular, they can sometimes become a heavy handed spoof with none of the charm.  Boultwood doesn't fall in to that trap at all.

His writing here is fast paced, witty, fun and positively gripping right up to the final page.  'It Came' is one of those titles that once you pick up and begin reading, you just can't put it down again.  The sheer level of fun in this title made me actually think  I was reading a graphic novel based on an old movie or something.  It really wouldn't have been out of place as a black and white movie starring some of that eras biggest stars as well.  A lot of that is also down to Boultwood's art that goes hand in hand with his writing.  Just on the strength of the writing and art, you can really see that Boultwood has gone in to making this title with such affection for the kind of movies that have inspired this story so much.

I have to admit that 'It Came' is one of the funniest graphic novels that I have read in a very long time.  The wise cracks, the action, the quick pacing all add up to making this a hell of a fun ride for the rider and Boultwood's love for all things B-movie related really crank up the humor too.  Definitely one well worth picking up for both the science fiction fans but also the cheap low budget movie fans out there too.