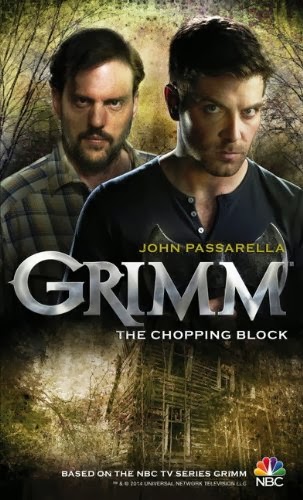 
When a pile of bones is discovered in a Portland forest, severed and stripped of flesh, homicide detectives Nick Burkhardt and Hank Griffin quickly rule out an animal attack, but suspect the killer is something other than human.

Soon more skeletal remains are unearthed, and tests reveal that the bones were cooked before burial.

As the body count increases, Nick, Hank, and reformed Blutbad Monroe must track down a Wesen with a taste for human meat, before the killer can butcher their next meal...


'Grimm' is in to it's third season now on television and is getting more and more popular with each episode shown.  The show is also getting darker and darker too.

With the showing of the third season showing in the UK, Titan Books release their second novel based in the world created by the shows writers.  The first novel, by John Shirley, was a good book but a little disappointing in places and with it's portrayal of the shows characters.  This however, is completely different.

'The Chopping Block' by John Passarella is a much darker affair.  In fact, it ventures much further in to the darker elements of the stories than the show by far and the story is much better for it.  Think of it as an extended episode of the show but with added guts and gore, you wouldn't go far wrong with that comparison.

The fact that it's much darker than both  the series and the first novel that Titan Books released have definitely made it a much better read.  In fact, one of the impressive things here is that not only can you read it and be entertained by the story even if you haven't seen the show but you can also really get in to it as a die hard fan as well.

For the fans out there, there are many new layers to the characters.  Alongside the main story of murder, there are also two other tales too.  You have Juliette suffering some heartache at work and also Monroe trying to help an old friend.  While they don't really come across as essential to the solving of the case, it was nice to see a glimpse in to their world as well as Nick's.  When their respective stories ended and we reached the conclusion of the case, I actually found myself missing  the little insights in to their world.

However, one of the main strengths of this book is that it was treated like a full on mystery / thriller but with a supernatural and unreal slant.  There were no obvious clues and the duo of Nick and Hank had to do some proper detective work.

Character's wise, they were a lot closer to the show's portrayals than in the first book by John Shirley, the only difference being that they had a bit of a darker edge to them.  That fit in really nicely with the story and made me want to read page after page of the case.

All in all, this isn't the best supernatural book I've ever read but at the same time, this is an absolutely superb book that will both hook in fans of the show and even non fans as well.

Definitely another Titan Books release well worth picking up.