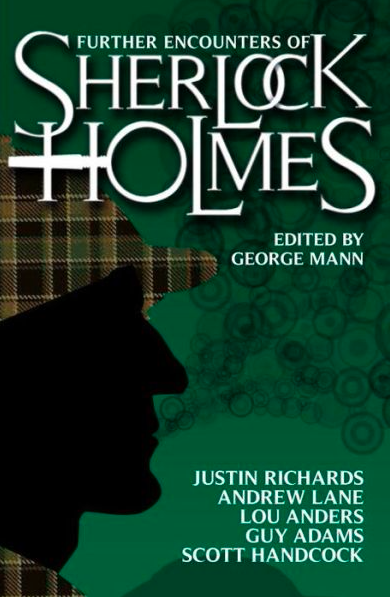 
Once again the spirit of Sherlock Holmes lives on in this collection of twelve brand-new adventures.

Wonder at how the world's greatest consulting detective plays a deadly game with the Marvel of Montmartre; investigates a killing on the high seas; discovers Professor Moriarty's secret papers; battles a mysterious entity on a Scottish mountain; travels to Mars to unravel an interplanetary murder; and solves one last case with Dr Watson Jr!


George Mann seems to be a permanent fixture on this site not only because of his prolific writing but also because of his editing work.  Here he makes his second appearance on the site as an editor with the second collection of short stories featuring the worlds most famous detective in the shape of Sherlock Holmes put out by those folks at Titan Books.

With not only the characters popularity at an all time high thanks to television shows such as 'Sherlock' and 'Elementary' but also to a court ruling that has sided with the idea of putting a lot of the Holmes mythos in to the public domain, which would in turn mean we could be seeing a lot more stories to be told.  As a fan, that makes me very excited.

That's why when this book came through my door, I was very eager to get it open to read it from cover to cover.  Knowing that after editing the superb first collection, George Mann would be editing this collection too meant that there was a massive air of expectation with this release.

I must admit that after enjoying the first collection so much, I was a little worried that it wouldn't match up to that ones quality.  I shouldn't really have worried if I'm being completely honest.  With a name like  George Mann editing, I knew there wouldn't be any chance of it being any less than good.

When I scrolled down the names of some of the authors involved, I couldn't wait to see their takes on the iconic detective and to see what new adventures they were going to send Holmes and Watson on.

All of the stories interested me and kept me reading but there was definitely one that stood out for me above all of the others.  In fact, it stood out so much that I really wouldn't think that it would be at all out of place as an episode of one of the those intensely popular shows that are on our television sets at the moment.  That story was 'An Adventure in Three Courses' by Guy Adams.  In that one, Holmes is having a meal in an unusual restaurant with his usual cohort, Dr Watson.  They are surrounded by criminals all ready to pounce at any moment.  The story creates such a feeling of tension and dread that I finished the story, flipped the pages back and read it again.  It's been quite a while since I wanted to do that with a short story.

I don't honestly think that there was a bad story amongst this collection.  For an anthology, that's always a really hard line to walk.  Even with the more, we'll call them unusual, stories that not only sent Holmes to Mars but also had him involved with a certain machine that came from the brilliant mind of H.G. Wells, they still completely held my interest.

If you are a fan of Sherlock Holmes then this is definitely a set worth picking up because you can clearly see that these writers are fans of the great detective himself and therefore treat the character with respect.  The only thing that disappointed me with this set was the fact that I was hoping that George Mann would have included another story of his own to this collection but alas he hadn't, although that's just the fanboy in me talking.