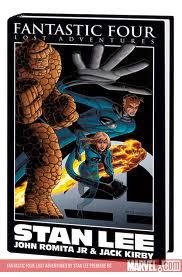 
Stan Lee and Jack Kirby made pop-culture history during the 1960's with their landmark run on Fantastic Four.

Unabridged for 102 consecutive issues, the legacy of their work together has influenced the imaginations of comic-book creators and pop-art innovators.
And guess what?  It's time to make room for a 103rd issue!

Newly unearthed by comics archaeologists, a lost classic by Stan and Jack has made it into the hands of astonished FF fans everywhere.  Featuring art by Kirby, much of which has never been seen by the public, this restoration project was finished off with scripting by Stan and inked by legendary FF delineator Joe Sinnott - making a reunion of the dynamic combo that made the Marvel Age of Comics so scintillatingly super and undeniably influential!

Rounding out the contents of this collection are three other classic stories by Stan Lee that explore many different facets of Marvel's First Family and the universe they helped found.

All have one thing in common: the heart, soul, wit and charm of Stan 'The Man' Lee.


With a new 'Fantastic Four' movie on the horizion, I figured I would take a look at a collection of stories that not all FF fans might have seen.
When it was announced that a missing 'Fantastic Four' story that had art by Jack Kirby, arguably one of the greatest comic book artists in the comic book world, and written by the legendary Stan Lee, I was massively excited to see where the masters of the comic book medium were going to take one of their most famous creations.

I have to admit that a collection with three different versions of the same seemed a little over kill, even to a massive FF fan such as myself.

You have a version of the story at the beginning called 'The Menace of the Mega-Men', then you have the original pencil drawings by Jack Kirby along with notes by Stan Lee and then you have a version of that story called 'The Monstrous Mystery of the Nega-Man' as well.  And yes, he was called 'Nega-Man' in that one because he went in to the Negative Zone.  All of  these were very similar but with different panel placing and dialogue.  One also had a different ending entirely.  While it was good to see the differences between the three, it just felt a little like over kill having one after another but that said, there really wasn't any other way they could have done it without it still feeling like repeating themselves.

Another story here called 'World's End' was a cracker of a story.  I really liked that one and the art from Romita Jr., really brought the story to life in a really big way.  However, while I did like the story, some of Stan Lee's writing seemed a little hit and miss during a couple of small parts during the story.

We also had a story called 'Homecoming' that had a myriad of some of the biggest Marvel names take part in creating a story and we had a funny one to close out the collection that featured Stan Lee himself as a hero in a tale called 'If This Be...Anniversary!'.

All in all, there were some great moments both art wise and story wise in this collection but also some rather hit and miss moments as well so in all honesty, I felt a little disappointed with this release.  It was the sort of release that held the promise of so much and sounded like it would be amazing on paper yet in reality just seemed like a normal issue.  That's a bit of a shame because the collection should have felt like it was a special, once in a life time experience for the readers but sadly it didn't have that.

That said, this is still a good collection and is a really interesting addition to the collections of the fans out there because you get to see how a story can evolve depending on who is working on it.  As a writer myself, I found that interesting to see different takes on a story.  Maybe one for the more hardcore fans out there.