Doctor Who: The Greatest Show in the Galaxy DVD Review 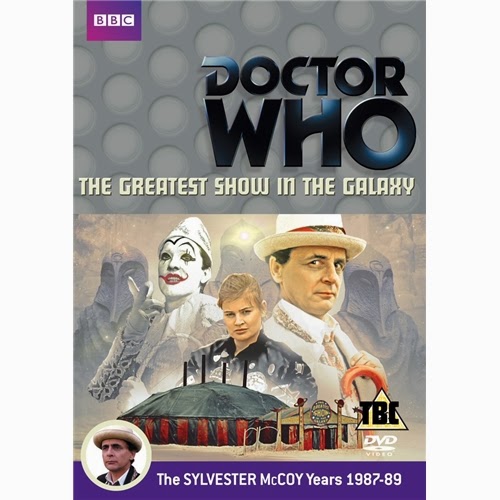 Sylvester McCoy as The Doctor
Sophie Aldred as Ace
T.P. McKenna as The Captain
Jessica Martin as Mags
Ricco Ross as The Ringmaster
Ian Reddington as Chief Clown


Although Ace hates clowns, the Doctor decides to take his companion to the Psychic Circus on the planet Segonax. There they find a group of scared performers who live in fear of the sinister and creepy Chief Clown.

But what is so dangerous about this particular circus, why is there such a small audience and will Ace be able to overcome her fear before it's too late?


As a long time fan of Doctor Who, regardless of whether it's the classic episodes or the fast paced episodes of today, I enjoy just kicking back and watching episodes at home with my little lad.

This time, I let him choose which one we would watch and this was the choice he came up with.  His choices for grabbing  this one off the shelf were simple.  He likes clowns and Ace is pretty were his reasons for choosing this one to watch.

Well, having not gotten around to seeing this one yet, I approached it with a little bit of trepidation in that it sounded a bit cheesy and it had Sylvester McCoy in.  I've never been that big a fan of his era and if I'm honest, always found his stories to be mostly weak but with a few good ones thrown in here and there.

This one, 'The Greatest Show in the Galaxy', is one that is a bit hard to describe in a nutshell.  The story itself isn't all that good.  The Doctor and Ace travel to a planet and are then lured to a circus that has sinister forces behind it.  That's about it really.  You get to find out who is running the show, sorry couldn't resist the pun, and apparently it's someone who the Doctor has always known about yet this is the first ever time they have ever been mentioned.

For the most part, the story doesn't gel for me.  I get that they had some production problems and had to finish it off with a lot of improvising sets wise but the result felt a little bit like a bit of fan fiction instead of an actual episode.

The story behind the episode is that it's meant to be a bit of a parable for television production in general.  You have a creepy family holding up numbers to rate the performers that are evidently aimed at us, the viewers in television land.  You have the power behind the circus that are obviously meant to be the executives that are in charge of making and cancelling the television shows and much more.  All in all, the attempt at being clever was an idea really interesting on paper but poorly executed.  Also some of the characters just came across just as heavy handed as the story itself.  You have the Captain whose semi abusive relationship with Mags was meant to mirror the mean relationship between the sixth Doctor and Peri.  Then you had the Whizz Kid character that was meant to be poking fun at the 'fan boy' element of Doctor Who.  Both came across as really mean spirited and in all honesty, not really needed when they could have used better characters.

The high points of this four part story however was the beginning seeds of the character that Ace would later become.  The make up job on Mags when she begins to change made me think of the Dario Argento movie 'Demons', although obviously not as graphic.  I also liked the performance of Ian Reddington as the Chief Clown, who was wonderfully creepy and sinister.

I have to admit that the best part of this release is definitely the special features that we have been treated to here.  There are so many good 'behind the scenes' parts that it's literally a treasure trove for the old time fans out there.  I know that there are a lot of fans out there that absolutely adore the McCoy era of the show but even though I'm not one of those fans, I still found loads here to not only interest me but to make me check  out the other McCoy releases.

All in all, while I found this story to be a bit disappointing, the ideas were there.  It's just that the execution of the ideas were a bit too weak to pull them off.  That said this four part story is really dragged along by the superb performance by Ian Reddington.  He's wonderfully creepy and I couldn't take my eyes off of him whenever he popped up on the screen.  It's just a shame that this is one of those types of stories that really should have been better than it ended up being.

That said, the sheer amount of special features that are on display here really make this release worth buying for those alone.  The great 'behind the scenes' stories that come out of these are really interesting and went a long way in to explaining the genesis of the story itself.

Maybe just one for the hardcore collectors out there.