Doctor Who: The Day of the Doctor DVD Review 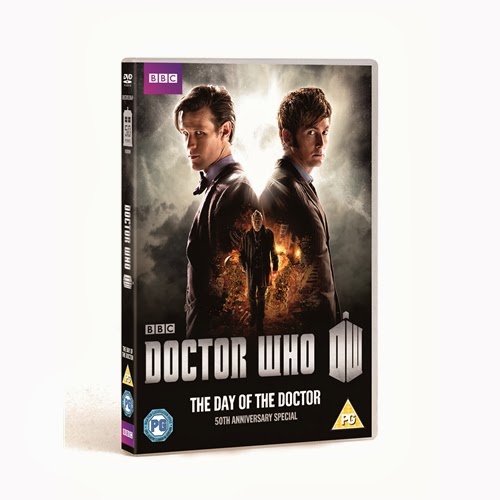 
In 2013, something terrible is awakening in London's National Gallery; in 1562, a murderous plot is afoot in Elizabethan England; and somewhere in space an ancient battle reaches its devastating conclusion.


With the show celebrating it's 50th anniversary, the special episode to mark the landmark moment had to be something special so Steven Moffat decided to do something that amazingly, no other Doctor Who writers had done before.  He was going to revisit the infamous moment in the characters history in which The Doctor destroys his home planet to end the Time War.

The fact that he was going for such a tough and well known subject worried me a fair bit as a fan because of the scenario being such an integral part of the character.  Would the man that creates such a feeling of division between the fans do the important moment justice?

I have to admit that Moffat definitely pulled a cracking story out of the bag on this one.  The story itself felt a bit like a love letter to the fans in that if you are a long term fan of the legendary show.  There were so many nods and tips of the hat to the past incarnations of The Doctor.  Little bits here and there that showed just how much of a fan the makers of the show are.  I could easily do an article on the little nods and bits of trivia alone due to there being so many of them.

One of the things that I really liked was the fact that not only did we get a superb, heart felt story of the final battle in the Time War but we also got  the return of my favorite bad guys in the shape of the shape shifting Zygons.  Weirdly, they were only in one other episode, in the Tom Baker era, but they left such an indelible mark on me growing up that I was really excited to see them here.

We also get the return of Billie Piper.  While she is called Rose Tyler, she is actually just using the vision of the character used by the weapon called The Moment.  That was a great bit of casting because it gave that part of the story a personal feeling to it.  A link to the characters past and future.

I don't want to do a spoiler heavy review here so I won't say too much more but there are some great cameo's as well as some superb use of archival footage to bring back the other versions of The Doctor.  We also got our first glimpse of someone who could, just maybe, be a very special person indeed in the forthcoming series.

My favorite part was near the end in which we see a cameo by someone very special indeed, who then proceeds to have a chat with Matt Smith himself.  I know it's no doubt been spoken about a lot on various other websites but I hate spoiler heavy reviews so I won't reveal it here.

As well as some really interesting special features, we also get two fantastic mini episodes.  One of which is a harrowing look at the last day of the war and another has the return of the criminally underrated Paul McGann incarnation of The Doctor.  Utterly superb.

All in all, speaking purely as a fan and not a cynical blogger / reviewer, I absolutely adored this special movie.  After seeing it in 3D in the cinema and then getting to watch the DVD release, there's not much to choose between the two.  The 3D version does involve you a little deeper due to the fantastic special effects but the DVD release doesn't lose a lot by being in normal 2D.  The effects are still impressive, the story still resounds with fans new and old alike and the banter between the three versions of The Doctor is both touching as well as hilarious.

Well worth picking up, even if you aren't a fan of the show itself.  If you are, just sit back and be taken along on an absolute thrill ride.