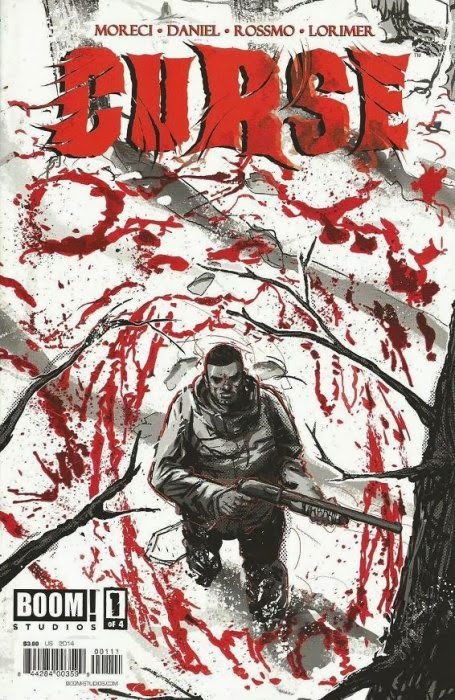 
Laney Griffin is a man who will do anything to save his son from leukemia, but the cost of treatment has broken him financially. When he pursues an elusive murderer in the wilderness of his small, rural community, in the hopes of securing a substantial bounty, Laney is confronted with something he never could have expected: a werewolf.

The captive lycan, in human form, turns Laney’s life upside-down, forcing him to confront his haunted past and race against the clock—because the wolf will return, and Laney’s son’s condition continues to worsen.

CURSE is a story of a family’s survival at all costs.


The good ol' werewolf has gotten a bit of a bad reputation recently.  Thanks to some really sub par movies, novels and comics, the once legendary Lycan has began to be seen as old fashioned and cliched.  That's a real shame as it has a good layer to make it in to a really sympathetic monster instead of just being evil for evil's sake.

When I read that Boom! Studios were going to be doing a werewolf story, I was actually a bit worried that it would end up being yet another story that would just get lost in the crowd.

Here Boom! Studios have put out an absolute cracker of a werewolf story that, at last, has bite.

Miichael Moreci and Tim Daniel have written both an exciting story yet one with a beautifully beating heart at the middle of it all.  Deep down this is a story of a father who will do absolutely anything to ensure that he can help his son get the leukemia treatment that he needs to survive.  I really was impressed with just how much of an emotional slant it put on what could have been just a normal 'man hunts lycan' story.

Another thing I noticed was the intelligence of the writing.  It's not just a bog standard good vs evil story.  There are multiple layers, multiple parts of the story that all merge together to create this dark, gritty tale yet it still manages to hook you in and immerse you in to the lives of the characters themselves.

All that said, there was one thing that struck me the most about this first issue and that's the absolutely stunning art by Riley Rossmo and Colin Lorimer.  I loved how they used really well placed splashes of colour to put a punch on to certain panels.  It really drags the eyes to the art work and really created a memorable looking issue for me.  I also liked the detailing and the dark, gritty feel of the art as well.  I wasn't all that familiar with Rossmo's and Lorimer's work but on the strength of what I have seen here, I will be checking them out a lot in the future.

If you are put off by this being a werewolf tale then don't be.  This debut issue of the new series from Boom! Studios is utterly brilliant and completely won me over 100% in to wanting to read the next ones.  There's the intelligent writing, some great pacing and all of that alongside some absolutely stunning art make this a must have debut issue.  For once there's a werewolf tale that not only has an emotional heart beating through it but also really hooks the readers in without falling in to the usual cliched traps.  Utterly brilliant.