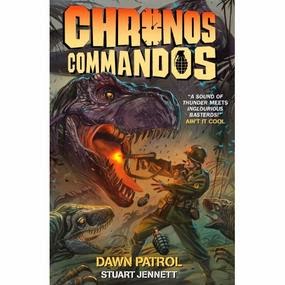 Art and Cover By
Stuart Jennett


Nazis, Dinosaurs and a war for all time!

When the Nazis develop time travel technology, only the Sarge and his misfit band of Chronos Commandos can stand against them - with the Cretaceous as their battleground!

Fearsome raptors, giant spiders, and a towering Nazi nemesis: the Commandos face many foes in the fight for the future.

The body count is high - and few will make it back alive!

This collection of the stunning first series is packed with exclusive features - including declassified files, unseen sketches,  and blueprints.


When a graphic novel has a picture of Albert Einstein shooting an automatic weapon, a picture of a soldier shooting a T-Rex and more on the back then you know exactly what you are in for when you start to read this one.

I have to admit, I wasn't all that sure when I read the synopsis for it but it grabbed hold of enough of my interest to want to give it a go at least.

After reading it, one thing struck me and struck me hard.  'Chronos Commandos' is absolutely brilliant in it's bonkers story and action packed pages.

With a story that felt like it was going to be pure comedy, the end result was completely different.  Jennett has crafted a fast paced, fun and action packed story here that is absolutely jam packed full of twists, turns and explosive panels that literally fly off of the page.

One of the things that I liked the most was the simple fact that despite it's outlandish story idea, the story itself feels like it wouldn't be out of place as a big, Hollywood blockbuster.  That's both thanks to the pacing of the action and the cinematic feel of the panel work and the art.  You could imagine this mix of 'Band of Brothers' meets 'The Lost World' coming to life on the big screen.

Characters wise, they're really what you would expect from an action packed story featuring a team of Commandos.  Sarge reminded me a little of the gung ho, balls to the wall character played by Arnold Swarzenegger in 'Predator' but with a bit of the sly John Wayne sensibility about him.  All wise cracks and heroic gun shooting, he comes across as both a homage and a parody without feeling silly.  That's a hard line to straddle but Jennett manages it brilliantly.

Art wise, it looks absolutely fantastic.  The art really brings the writing to life and most definitely hooked me in.  I couldn't help but read it from cover to cover before wanting to read it again.  You can't ask for more than that from a graphic novel can you?  I can't stress just how well the art fits the story.  It's positively top notch.

All in all, I definitely can't tell you enough just how fun this graphic novel from Titan Comics is.  It's action packed, witty, exciting and it has Nazis who can time travel, dinosaurs AND Albert Einstein going all Rambo on some Nazis after his lab is attacked.  What more could you want?