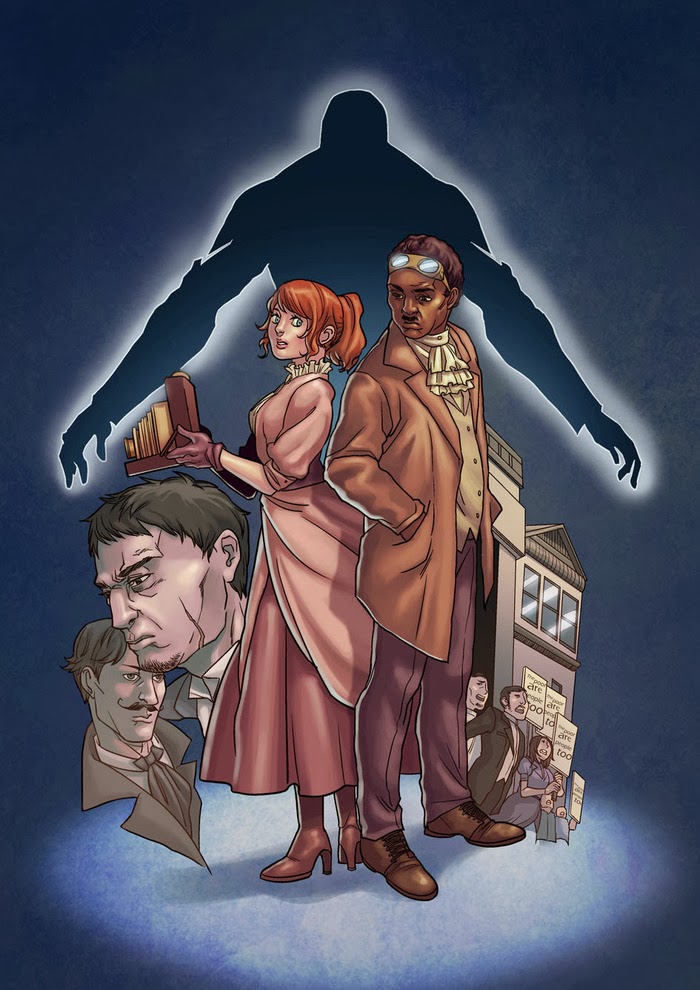 BURBANK, CA. Madeleine Holly-Rosing, writer/creator of the steampunk webcomic BOSTON METAPHYSICAL SOCIETY announced she would be re-launching her Kickstarter campaign on Wednesday, January 22 to fund the print issue of Chapter 3. “Though we were unsuccessful with our first Kickstarter, we learned a lot about what backers are looking for,” Ms. Holly-Rosing commented, “So we scaled back and decided to plan on creating several Kickstarters with smaller goals.”

The story is about an ex-Pinkerton detective, his spirit photographer partner and a genius scientist who battle supernatural forces in late 1800’s Boston. Unlike many steampunk stories which are set in Victorian England, this one takes place in America and involves such historical icons as Alexander Graham Bell, Thomas Edison, Nikola Tesla and Harry Houdini. But what really stands out is its subtle examination of class in America. “I know most people don’t like to admit there’s a class system in America but there is. Using the late 1800’s as a backdrop allows me as a story teller to take advantage of the organic conflict between the classes during that time,” Ms. Holly-Rosing stated. “I can use the social dynamics of that time period to mirror the social and class issues we deal with today.”

Ms. Holly-Rosing is hoping to raise $3,000 to cover printing costs as well as incentives, shipping, postage and fees. One of the stretch goals is to print Chapter 4. The Kickstarter Campaign will run for thirty days and end on February 21.

Posted by Pat Scattergood at 05:59