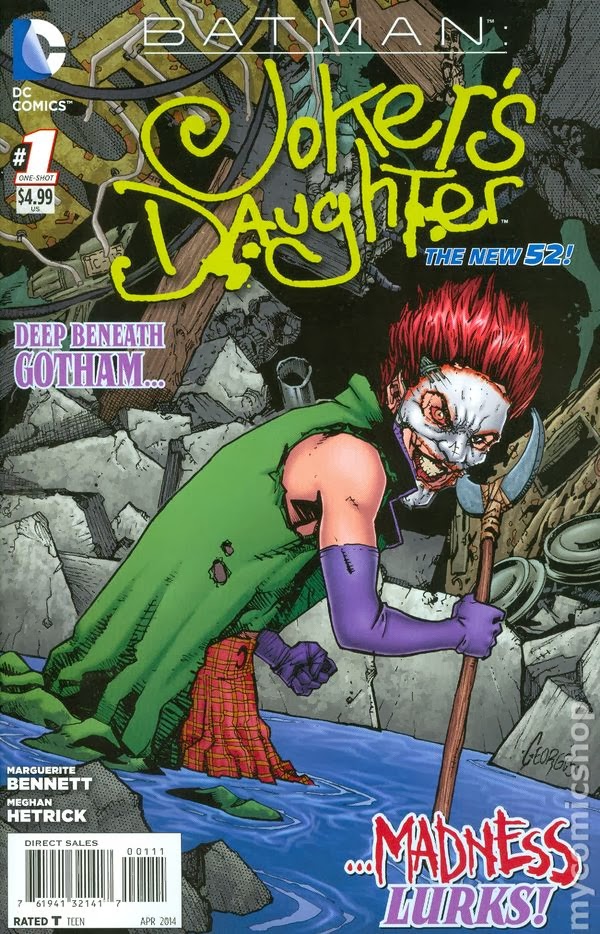 
Who is The Joker’s Daughter? What horrors lurk in the mind of this deranged lunatic, and why is there more to her than meets the eye?

This special issue tells a sordid tale in the life of one of DC’s most popular new villains!


The new character of The Joker's Daughter has both excited and divided Batman  fans out there.  Some think that she is a superb addition to the growing roster of rogues in Gotham City.  Other fans absolutely hate the character with a passion last seen when the 'Catwoman' movie was released.

Here DC Comics releases a special one shot comic to flesh out (sorry) the character and to see her motives as well as kick off her quest to find her 'father'.  The one question being would this special issue gain any new fans from the naysayers or from the undecided fans out there?

For the most part this is a superb psychological look at one of the newest characters in the DC Comics villains gallery.  They really go all out with showing just how fractured the mind in this woman truly is.  I loved how they had the cadence of her dialogue feel like it was rushed and all over the place as if the voices in her head were too fast for her to keep up with.  I also really liked the fact that she started the issue as someone who was mentally psychotic but then degenerated in to someone who really doesn't know what is real and what is just in her mind.

We also had what was little more than  a cameo from Batman himself.  While he's not in the issue for long, he really serves as a very important kicking off point for the story itself.  We also have the return of Dollmaker as well that serves as a link to past events involving the 'Clown Prince of Crime' himself and as a catalyst for the character of The Joker's Daughter.

The art here is superb.  I really liked the dark and grimy feel of this one shot issue.  If the character is to continue, and with the ending here I see no doubt that she will, I hope they keep this art style for sure.  The art by Meghan Hetrick really brings the characters to life here and it's nice to see a female character that isn't all big boobs and underwear shots.  She really comes across as a messed up kid who you would maybe see at a Marilyn Manson concert albeit one that is absolutely psychotic and crazy.  That's both down to the art here and the writing combining so well.

There's a superb cover as well by Georges Jeanty.  Jeanty is fast becoming one of my favorite cover artists out there due to the ability to really put the essence of the characters on the cover without making it look  cliched.

All in all, I think this is a superb look at one of DC Comics newest characters.  I have to admit that I am still not completely sold on the character herself but if there are going to be more issues like this then I'll be won over pretty quickly.  The only downside to the issue is that it felt like there was something missing.  I couldn't just place my finger on what didn't quite gel for me but I was still very impressed with the story here.  The undertones of self hatred and mental problems really gave the character more layers so it's definitely worth a look for the Batman fans out there.