The Heart of Valour Review 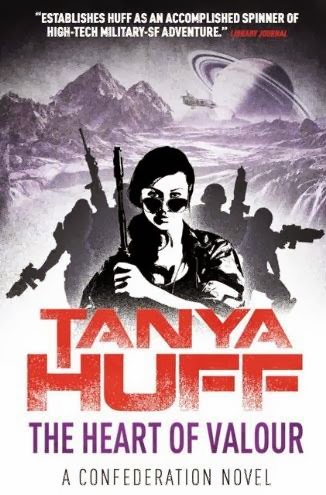 
Gunnery Sergeant Torin Kerr was a Confederation Marine's marine. She'd survived more deadly encounters-and kept more of her officers and enlistees alive-than anyone in the Corps, and she was determined to keep that record intact. But since her last mission, she'd been sidelined into endless briefings and debriefings with no end in sight. So, of course, she'd jumped at the chance to go to Crucible-the Marine Corps training planet-as a temporary aide to Major Svensson.

The major had been reduced to little more than a brain and a spinal cord in his last combat, and he and his doctor were anxious to field-test his newly regrown body. It should have been an easy twenty-day run. After all, Crucible was only set up to simulate battle situations so that recruits could be trained safely. But they were barely on-planet when someone started blasting the training scenarios to smithereens.

Suddenly, Kerr found herself not only responsible for the major and his doctor but caught in a desperate fight to keep a platoon of Marine recruits alive until someone could discover what was happening on Crucible.


Tanya Huff is fast becoming a permanent fixture on this site due to her prolific nature and the amount of her books that are being released by those folks at Tanya Huff.

Here, she returns to her 'Confederation' series and boy what a return it is.  The first book in the series was a very well paced and well written novel whereas the second one seemed a little bit off and like it was missing something.

That's most definitely not the case here.  This is the third book in the 'Confederation' series and really ramps up the action.  Where as the characterization was a little off in the second book, it's the opposite here.  We get to find out new things about the characters that we already know but we also get introduced to some new ones too.  They sit really well with the existing characters without feeling too out of place.

Talking of the characters, it's great to see how much the character of Torin Kerr.growing in to such an exciting action hero in the series.  It is true that the novel can veer a little bit in to a couple of science fiction cliches but Huff's writing is so well paced and well thought out that it comes across as originally written.

If the quality of this story is anything to go by then I really can't wait to see what the next installment is going to be like in the series.  Once again Tanya Huff has released a well written and paced tale that  the science fiction fans out there can really get their teeth in to.