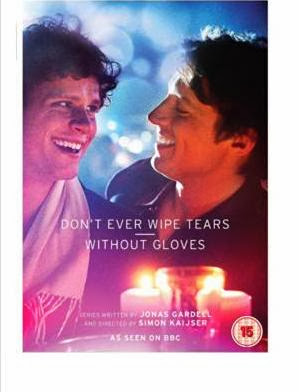 
Rasmus arrives in Stockholm in September 1982, leaving his small town upbringing behind him forever. Young and beautiful, he throws himself into the lively city’s gay scene. When, on Christmas Eve, Rasmus meets Benjamin, a deep love ensues between them and for a brief time their blissful happiness is uninterrupted.

Around this time, inexplicably, young men start to get sick, then fade away and die. AIDS has come to Stockholm and suddenly nothing can ever be the same again, even for Rasmus and Benjamin.

Set in Sweden, the series was a huge public and critical success when aired and it recently won the Kristallen (Swedish Emmy) for Best Television Drama. ﻿

Don't Ever Wipe Tears Without Gloves also won the Audience Award at the Series Mania Festival in Paris last April, in competition with American TV dramas such as Game Of Thrones and House Of Cards.


As a fan of Nordic movies and television shows, it's become blindingly obvious that some of the best television and movie viewing has been coming from them in the last few years.  Hence why I had some massively high hopes for this mini-series.

With a cast as strong as the one here, a few of the names will be very familiar to other avid Nordic viewers, you would expect a strongly acted and effecting mini-series and that is exactly what we have got here.  I must admit that I was a little worried that the show would be massively melodramatic and come across as a bit silly in places but they kept the story well grounded and in places, heartbreaking.

The intelligent and subtle writing really does a great job of recreating the AIDS scare of the 80's but without overdoing it.  Yes, the disease is a major plot point but it's more about the relationships between the characters than it is about the condition itself.  When it does come in to play, I did like how they showed it in a personal way without coming across as one of those 'disease of the week' television shows / movies that they show on those true life channels so much.  There were moments where I had to pause the show because it was so affecting that I was in tears.

It is true that there were a couple of moments that veered in to melodrama but not enough to take away from the story or the massively strong performances.

If you are a fan of affecting, well acted and well written dramas with an emotional edge then this is definitely a worthy addition to your collection.  Just remember to bring some tissues.