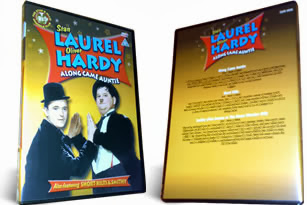 
As a way to make peace between two feuding Scottish clans, one invites the other over for supper, but things don't turn out quite as expected.


Smithy (AKA The Home Wrecker)


After being discharged from the 372nd infantry, on account of a bean shortage, smithy seeks employment. He finds employment at a construction site, where he helps to build a house, and soon causes havoc amongst other workers. The construction company owner leaves for a week, and tells his secretary to send a letter to Mr. Smith telling him to complete the construction of the house while he (the owner) is away. The letter is accidentally sent to Smithy who manages to complete the house. When the owner returns the house is complete, and Smithy is commended until the last support beam is removed...


'Along Came Auntie' is a bit of a curious one to review.  Part of that is due to it being a short with Oliver Hardy on his own but with his soon to be legendary partner Stan Laurel as one of the writers.

While Hardy's and Laurel's solo shorts are a little hit and miss yet I was very excited to get my hands on this DVD to see a couple here and find out which side of the hit and miss fence they fell on to.

With 'Along Came Auntie', the DVD starts with a little bit of a whimper.  It's not an awful short by any stretch of the imagination but for some reason it just doesn't seem to gel as much as I was hoping it would.  Some of that is down to Glenn Tryon.  He was the man that Hal Roach was trying to mould in to the next Harold Lloyd.  It didn't work.  Here, he comes across as rather annoying but not in a funny way.  That's most evident in the drag scene.  Seeing him do that really made me wish that Stan Laurel had have been cast in the role instead.  On the plus side, while not given all that much to do, Oliver Hardy does show some of the skills that would make his partnership so loved.


This one is a short starring the incomparable Stan Laurel and is one of his better ones.  While it won't go down as one of his best, 'Short Kilts' is actually a really funny and quite worth your time, especially if you are a fan of Laurel and Hardy themselves.

For the long term fans of the famous duo, a regular compatriot in the shape of James Finlayson, is also in this one and for me, that makes it more than watchable thanks to his chemistry with Laurel himself.


Smithy (AKA The Home Wrecker)


Last but not least we come to a Stan Laurel short called 'Smithy' in which the hapless guy tries to build a house after a bit of a mix up with some instructions putting Laurel in charge with hilarious results.

Once again, Laurel and Finlayson clash in this short that reminded me a bit of the Buster Keaton short.  In both they have to try to built a house with disastrous results and while the Keaton one was better, Laurel definitely shows the viewer some of the skills that would make his partnership with Oliver Hardy so beloved by their fans.

Here there are some absolutely brilliant moments that had me howling with laughter and somehow, no matter how absurd some of the scenes become, the performances here make it all seem plausible.  Also Tryon, who wasn't all that memorable in 'Along Came Auntie', does a much better job here and actually comes across as having a lot more charisma.

All in all, I would most definitely say that this set of shorts is well worth getting for the Laurel and Hardy buff in your life as it shows some of the magic that would go on to make their partnership so legendary and beloved by movie goers.

They don't make them like this anymore do they?