You Can Rely on Platypi: Book One Review 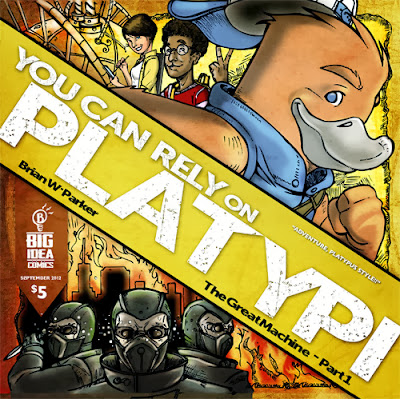 
Leaving Platsylvania, Iggy finds his way to Anchor Town to start into his life of independence. After meeting a new friend and getting a job, things are looking a little boring for our hero, when suddenly he is thrust into an high speed chase through the city, carrying a very peculiar package to an unexpected destination.

Iggy P. Platinus is your typical young guy, determined to make his way in the world on his own terms. Little does he know that soon he’ll be caught up in a mystery that will take him across the globe in search of ancient artifacts, pursue by masked men, mummies, and creatures of legend.


With a title like 'You Can Rely on Platypi', you would expect something that would be completely off the wall, funny as hell and maybe even a bit silly.  Yet here that's not that case at all.

In book one of this series,  Brian W. Parker creates a story that manages many things at the same time.  You have, in parts, an adventure that brings forth thoughts of an 'Indiana Jones' style action.  You also have some really funny and sometimes satirical comedy.  You also have some fantastic character work as well that really makes you feel like you are getting to know the characters themselves.

Parker's writing really has an easy flow to it and that gives the book a great pace as well as the twists and turns that make the story itself so fun to read.

Artwise, the black and white art that is also by Parker, gives a stylized look to proceedings and works superbly well with the writing.  That appears to be one of Parker's strengths as both a writer and an artist.  He would obviously understand the characters better than anyone and it shows here in spades.  It's true that the art won't set the world on fire or anything of that sort but it doesn't need to.  Sometimes the art will just fit the story so well that you couldn't imagine any one else doing the art and nor would you want to.

If you are looking for something a little different with a great sense of adventure then this is definitely a title that is well worth picking up.