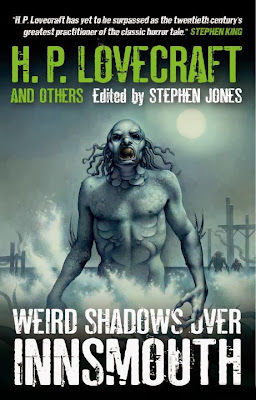 "Nothing that I could have imagined... would be in any way comparable to the demoniac, blasphemous reality that I saw..."

For decades, H.P. Lovecraft's masterpiece of terror, The Shadow Over Innsmouth, has inspired countless writers with it's gripping account of a tiny village whose inhabitants have surrendered to an ancient and hideous evil.

In this companion to the acclaimed anthology Shadows Over Innsmouth, World Fantasy Award-winning editor Stephen Jones has assembled eleven of the most skilled practitioners of the Lovecraftian craft.

...and nine more masterpieces of horror.

Including the original unpublished draft of The Shadow Over Innsmouth by H.P. Lovecraft, master of the macabre.


After the superb first collection, edited by Stephen Jones, was re-released by Titan Books, I was lucky enough to get a chance to read and review the second set of stories based on that classic by Lovecraft himself.

Would it live up to the high standard by the first anthology or would it fall a little bit flat?

Well, to be honest, it falls somewhere in the middle of those two.  There are a couple of absolutely fantastic stories here that follow on from the stories in the first anthology.  It shows the aftermath of the events and the characters from those stories without making it seem like it was essential to have read the first set.  The best of these is 'The Taint' by Brian Lumley.  His story really stands head and shoulders above the rest and is most definitely the highlight of the collection for me.

There aren't any terrible stories here.  Stephen Jones really has done a good job of choosing the right stories and putting them in the right order for this collection.  Yet for some reason, despite the stories being good, they just didn't grip me half as much as the first ones did.

One of the best parts of this collection is the inclusion of the unpublished draft of 'The Shadow Over Innsmouth' by H.P. Lovecraft himself.  It was fascinating from my point of view to see how this draft differed from the respected and well written version that fans have grown to love and want to read again and again.

All in all, while not as good as the first collection, this second anthology of stories linked to the Lovecraftian world is still a good anthology and well worth picking up.  If you are a Lovecraft fan then you will either have this in your collection already or you'll be wanting to add it.  The stories flow well together and you don't have to have read the first set to read this one either.  That's always a good touch when that happens.