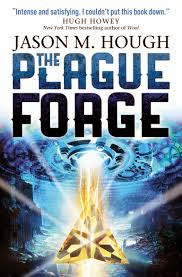 The elevators connected Earth to the stars.
The towers suppressed the deadly plague.
As the final Builder event approaches, five keys will unlock their secret.

After discovering the first key in the wreckage of a crashed Builder ship, Skyler Luiken and his crew follow the migrating aura towers in search of the four remaining relics. But time is running out: the survivors learn that the next Builder event will be the last, and one of the objects has already fallen into dangerous hands...

As the alien Key Ship looms above Earth, and the surface below is ravaged by corrupt councils, fanatical cults and infected subhumans, the team race to retrieve the missing artefacts.

Will they finally reveal the Builders’ plan?


The second book of this trilogy, 'The Exodus Towers', ended with a real tense and slow ending that had me pretty much chomping at the bit to get the third and final part to see just where Hough was going to take the characters.

The three main characters in the shape of Skyler, Tania and Samantha all share the spotlight in this, the third book of the trilogy.  All three are on their own, separate missions to find the remaining three artifacts to try to discover what the 'Builders' have in store for the world.

One of the main strengths of this approach is that you're not given a chance to breath or rest on your laurels.  Some of the moments that sprung from their adventures give the story a bit of sense of dread and fear running through it, almost as if they were fighting against the inevitable.  On this front of things, I've always liked how Hough had the characters of the Jacobites as a threat but one that was running through the story just under the surface.  Here, they come right to the forefront with a bang.  So much  so that because of how they had been written in the first two books, it took me quite by surprise.

While I liked Hough's characters for the most part, especially that of Blackfield, grew as the stories took shape but the newer additions to Luiken's crew in the shapes of Pablo and Vanessa, just seemed like the weak links of the story and didn't seem all that fleshed out or even important no matter how many times Hough had Luiken talk about them being so.

Talking of his characters, Hough wasn't afraid to kill them off during the writing of this trilogy.  One of the things that I liked the most was the fact that none of the characters died needlessly and none of them died just for the sake of creating a shock for the reader.  In fact, for the reader, it created a filling that nobody was safe.

The ending of  the novel is best described as shocking.  One of the things that worried me was that I was a little fearful that the trilogy would fall at the last hurdle and have a happy ever after style ending.  In fact, it was a rather downbeat ending and yet still felt like there was a glimmer of hope left.  I would personally like to see some more stories set in that world or see some more of the characters that were left alive.

All in all, this was a really well written and great ending of the trilogy that seemed to just get better and better as it went on.  Well worth getting for fans of action packed science fiction but with a slow burning feel.