The People Under the Stairs Pre-Release Blu-ray Review 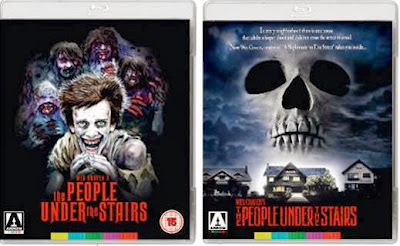 Written and Directed By Wes Craven

Wes Craven, the master of terror who brought you the infamous The Last House on the Left, invites you inside another house of horror!

“Fool” may be a streetwise kid, but he makes a decidedly bad decision when he agrees to assist a family friend in the robbery of their landlord’s imposing homestead. What begins as a routine break-in soon begins to take a sinister turn as the would-be robbers find themselves trapped inside and face-to-face with the terrible secrets which lurk within the building’s walls – and under the stairs…

The People Under the Stairs sees director Wes Craven return to one of his trademark themes: the savagery which lurks just underneath the skin of the outwardly conventional family unit. Often overlooked in favour of the director’s more A-list hits such as Scream and A Nightmare on Elm Street, The People Under the Stairs is a superior slice of home-bound horror which can stand proudly alongside Craven’s best works.


For some reason Wes Craven doesn't really talk about this movie all that much when he talks about his career and that is a real shame because it's by far one of the best movies he has done.

This movie really has a bit of everything in it.  There's a bit of dark comedy, a bit of fantasy ala a 'Grimm's fairy tale, some classic Wes Carven style horror, a house with a myriad of mystery passages and secret doors and even a sociological look at life all wrapped up in an entertaining package.

The writing by Craven is superb and honestly some of the best he's done in his long career.  He manages to not only touch all the bases in his movie but he makes it an incredibly  fun to watch movie.  A lot of that is because of how the cast deliver those lines and react to the things happening in the scenes.

One of the best performances is that of Everett McGill and Wendy Robie.  They make their characters menacing while at the same time chewing the scenery at every possible moment.  It's completely their movie and it shows because I couldn't take my eyes off of them both for the entire movie.

Another one of the strong performances was by far Sean Whaalen as Roach.  He made the character so wonderfully sympathetic and sweet that you would just will him on whenever you would see him in a scene.  Throughout the movie and it's scarier moments, Whalen and A.J. Langer's performances really made a lot of the movie about the friendship between those two characters and how they help each other survive all the horrid things that are thrown at them by the deranged man and woman in charge of it all.

The special features here are absolutely superb and incredibly interesting, especially to a big horror movie fan such as myself.  There are so many great little insights in to how they made the movie that I don't want to spoil them here for the viewers but some of the cast coming back to talk about the movie itself was a great touch.

It's a shame that this movie isn't better known than it is because it is most definitely one of the best horror movies to come out of the 90's.  However to just class it as that would be a massive disservice because there really is a bit of everything here for every type of movie fan.  You have dark fantasy, horror, thriller even some darkly comic moments too so what are you waiting for?

Posted by Pat Scattergood at 01:32