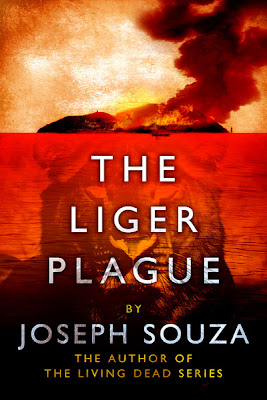 
Colonel Tag Winters receives a mysterious call while on vacation—a deranged terrorist playing a game of cat-and-mouse has released a novel virus on Cooke’s Island, Maine on the busiest day of the summer. Now his family has gone missing and all evidence points to him as the perpetrator of this biological event. Winters soon realizes that he must prevent the unsuspecting population from leaving Cooke’s Island or else risk this insidious plague from spreading to the mainland.

His fierce will to survive, as well as clear his good name, fuels his determination to discover the true perpetrator of this terrorist attack. As Cooke’s Island descends into unspeakable violence and mayhem, Winters must find his family and whisk them off it before they too fall victim. In the tradition of horror writers Stephen King and Dean Koontz, The Liger Plague is a blistering apocalyptic thriller that's impossible to put down.


For a book to be written by the 2013 winner of the Maine Literary Award for Speculative Fiction to come out, it creates a sense of hype around it and gives the reader a massive set of expectations when reading it.  Does this new book by Joseph Souza match that hype and those expectations?

I can answer that with a resounding yes.

In fact, I can do better than that.  This book manages to blow Souza's first two novels out of the water but lets not get ahead of ourselves here.

In 'The Liger Plague' Souza not only manages to create an action packed page turner of a story but at the same time, he manages to create sympathy amongst all the deaths and flesh eating. If the infected victims in '28 Days Later' can be classed as zombies then the victims of the 'Liger Plague' here are most definitely included too.  They are absolutely brutal in their attacks and some of the scenes will stay with you long after you have finished the book.  But that's not the only thing here, Souza manages to make the plague victims sympathetic by allowing them to keep their ability to communicate, it makes their brutal actions all the more tragic.

One of the things that I really liked about the book is that the zombies, if you want to class them as such, are intelligent and not just the shuffling, slow style flesh eaters that we are used to.  They can hunt in packs and yet due to the mysterious way that Souza has written about the virus, I highly doubt that we have seen it all in this book.  In fact, I would bet money on there being more revelations about it's transformation in the next books.

This blood soaked tale by Joseph Souza really gives feelings of Stephen King and Dean Koontz while retaining his own, unique voice.  Not only is this Souza's best book, it is also one of the best horror novels that  I have read this year.  The brutal nature of some of the killings may sound like they would put you off but if you let it do that then you would be missing out on a really good book.

My one complaint would be the character named Versa.  A massively unlikeable character to such an extent that I would have probably thrown her to the infected.  That's just me though.  I did like the fact that not all the characters are perfect.  Some make mistakes, some go too far.  That makes the story have a more realistic feel and in turn, makes it more affecting to the reader.

Definitely one worth picking up, especially if you are a King or a Koontz fan.  This is a massively impressive book but then again, what else can you expect from the winner of the 2013 Maine Literary Award for Speculative Fiction winner?