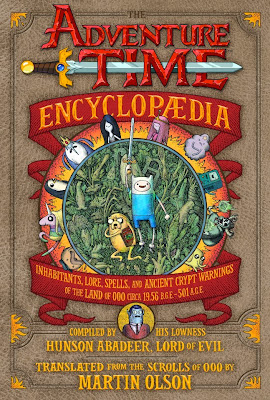 Compiled By His Lowness Hunson Abadeer, Lord of Evil
Translated from the Scrolls of Ooo By Martin Olson

Written by the Lord of Evil Himself, Hunson Abadeer (a.k.a. Marceline the Vampire Queen's dad), to instruct and confound the demonic citizenry of the Nightosphere, 'The Adventure Time Encyclopedia' is perhaps the most dangerous book in history.

Although seemingly a guidebook to the Land of Ooo and its postapocalyptic inhabitants, it is in fact an amusing nightmare of literary pitfalls, bombastic brain-boggles, and ancient texts designed to drive the reader mad.

Complete with secret lore and wizard spells, fun places you should visit and places where you will probably die, advice on whom to marry and whom not to marry, and how to make friends and destroy your enemies, this volume includes handwritten marginalia by Finn, Jake and Marceline.

Arguably the greatest encyclopedia ever written since the beginning of the cosmos, it is also an indispensable companion to humans and demons who know what time it is:


Despite being 31 years old, I love my cartoons whether it's the old classics from the 1930's right to the bright and sometimes even over excitable ones that are around today.  I especially like the ones where you can watch them with your kids and they'll be entertained but there will be enough jokes and scenes to keep the adults happy.

That is exactly where 'Adventure Time' comes in to it's own.  The bright and incredibly colorful adventures of Jake and Finn are riotously funny for the little ones and there are so many references and humor that will have the young at heart laughing as well.

I was a bit worried however, that because of the unique nature of the show, this book wouldn't be able to live up to that.  I shouldn't have worried really because Martin Olson has captured the feel and the atmosphere of the show superbly.

The book is broken up in to different sections and acts brilliantly as a book that you can pick up and read any section that you want to without feeling lost at all.  At the same time, you can read it from cover to cover as well.  The flow of the book is easy to really get in to and really brings the characters to life.

There are so many different styles of writing here and different points of view throughout the book, that you would think it would end up as being disjointed but it's not.  The little margin notes by Finn, Jake and Marceline are absolutely hilarious and you can't help but hear them in the characters voices.

If you are an 'Adventure Time' fan then this is absolutely essential.  Olson really captures the feeling of the characters and the world that they inhabit in such a spot on way that it really does sit side by side with the series.  Even if you are only vaguely aware of the show, this is still a very funny book that is more than worth picking up.