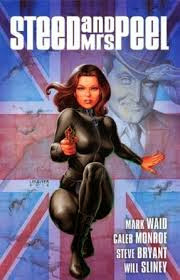 
Saving the world in style!

The classic British TV series 'The Avengers', one of the longest-running and most popular shows in history, returns to comics with all-new adventures!

England's greatest spy duo faces their most dangerous opponents yet!

The Hellfire Club has reformed - no longer looking to the past but instead determined to bend the British Isles to their warped version of the 'future'.

Their first target is the heart of London - are John Steed and Emma Peel read for their unorthodox foes?

Don't miss the return of the espionage icons!


The famous spy duo from the 1960's have finally returned to embark on more adventures to say jolly ol' England from threats everywhere but will this new series from Boom! Studios successfully recreate their swinging 60's hey day or does it crash and burn?

Well, I have to admit that while not being the biggest fan of the television show, I absolutely loved this graphic novel collection.  The way they recreated the feel and atmosphere of the show itself is fantastic and that is down to the writers here.

Story wise, the adventures here wouldn't feel out of place in the television show itself.  The flow and pacing really make the story one that lends itself superbly to the term 'page turner' in that you can't help but want to read it in one sitting.  The action here really feels true to the source material and yet doesn't feel kitsch or cliched.

With the art, the panels look as if they have been lifted from the legendary show and they have really stayed true to the characters that we all know and love.  It's the same with the action sequences as well.  They really pop and fly off the page.  However, it's the facial expressions that impressed me the most because they really seem to show the looks and the mannerisms that we have come to know from the real life characters.

If you are a fan of the famous spy and thriller show then this is definitely a graphic novel for you to pick up.  They stay true to the show and the characters themselves while putting their own spin on them and I find that highly impressive.  Definitely one that's worth a look.