Sherlock Holmes: The Will of the Dead Review 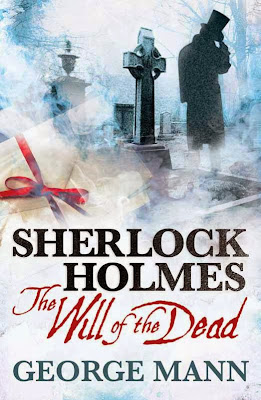 A young man named Peter Maugram appears at the front door of Sherlock Holmes and Dr Watson’s Baker Street lodgings. Maugram’s uncle is dead and his will has disappeared, leaving the man afraid that he will be left penniless. Holmes agrees to take the case and he and Watson dig deep into the murky past of this complex family.

A brand-new Sherlock Holmes novel from the acclaimed author of the Newbury & Hobbes series.


With the amount of George Mann books that have appeared on this site since we opened in November, I'm torn between thinking the man is a massively prolific writer or my site has grown sentient and fallen in love with his books.  It's going to be one of the two.  If it's the second one then site fans, if you see the words Skynet anywhere then I suggest you run like hell.

After the hit and miss nature of the James Lovegrove addition to Titan Books 'Sherlock Holmes' canon, I was hoping that George Mann could bring his unique style of writing to the forefront and regain some of the lost momentum.

Does he do that?  He most definitely does.

George Mann is an author that is well known for creating fully fleshed characters and stories that are jam packed full of twists and turns.  He keeps that reputation up here brilliantly.  Even with a pair of characters as established as Dr Watson and the eccentric Sherlock Holmes, Mann manages to put his own spin on proceedings as well as bringing in a well known face from his 'Newbury and Hobbes' stories.

The fact that he set this tale in the same universe as his other series was a brave move and one that could have backfired but here, he has written it so well that you could nearly think that Sir Arthur Conan Doyle himself had combined the two.

On paper, a story about a missing will may not seem like the most exciting story in the world yet with a writer like George Mann, the story itself would never be that cut and dry.  Instead there are twists and turns, cases running alongside the main one and loads of surprises along the way.

If you are a fan of 'Sherlock Holmes' or of 'Newbury and Hobbes' then  you really should grab this book, kick back, relax and let yourself be taken for a more than elementary ride.