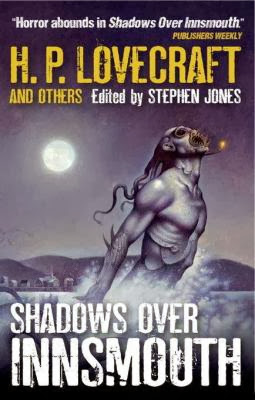 Village of the damned.

Innsmouth, that isolated New England fishing village where 'the vast huddle of sagging gambrel roofs and peaked gables conveyed with offensive clearness the idea of wormy decay'.  A desolate place where the bulging, watery eyes of the residents stared from misshapen skulls, and a musty stench blended hideously with the town's fishy odour.

...and twelve more terrifying tales.  Including the story that started it all, by the master of horror, H.P. Lovecraft.


'The Shadow Over Innsmouth' by H.P. Lovecraft is one of Lovecraft's seminal works yet for some reason he didn't really rate it himself during his life time.  That's a real shame that it's reputation has only grown after his young death because it really is a great and incredibly creepy story.

While a lot of decades have passed since the publishing of the original story, time has not dulled it's effectiveness and feeling of dread that runs through the entire story.  There are a couple of brief moments that kind of feel like they're slightly out of place but they don't lower the overall quality of the tale.  It's obvious why it's held in such high regards today because of the sheer quality of it's writing.

I was a bit worried that the rest of the stories wouldn't hold up to the massively high quality of Lovecraft's tale but they're all really good here.  While it's obvious that there are a couple that I liked more than others but I wouldn't say that there were none that were awful either.

One of the tales that stood out the most for me was 'Only the End of the World Again' by Neil Gaiman.  It obviously was a tale that he enjoyed writing because the flow and actual story worked so well that it was a fantastic choice for this collection.  All his trademarks were dark in the shape of the creepiness factor, the darkly humorous moments and much more.  Also the way that it linked in to the world that Lovecraft had created was masterful.

The rest of the stories were all very well done.  Kim Newman turns up twice in this collection, once as himself and once under the pen name of Jack Yeovil, and both stories are very effective at recreating the creepy and dread filled atmosphere of the original.  He was another writer had included a bit of dark humor in the story as well and it worked very well.

Also included in the collection are some fantastic illustrations by the trio of Dave Carson, Martin McKenna and Jim Pitts that really bring the stories to life here with some stunningly beautiful art and a couple of the pictures even make it worth picking the collection up for those alone.

All in all, Titan Books have done a truly fabulous job of re-releasing this collection and to be honest, it's an anthology that is an absolute must have for Lovecraft fans and for fans of creepy, fear inducing horror that creeps under the skin.