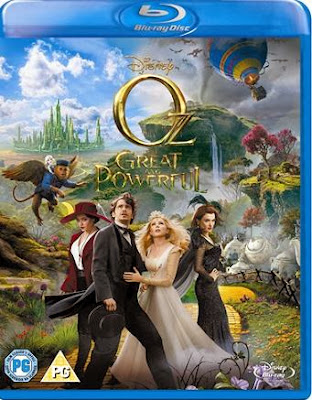 Based On
The 'Oz' Novels By L. Frank Baum

When Oscar Diggs (James Franco), a small-time circus magician with dubious ethics, is hurled away from dusty Kansas to the vibrant Land of Oz, he thinks he's hit the jackpot-fame and fortune are his for the taking-that is until he meets three witches, Theodora (Mila Kunis), Evanora (Rachel Weisz) and Glinda (Michelle Williams), who are not convinced he is the great wizard everyone's been expecting.

Reluctantly drawn into the epic problems facing the Land of Oz and its inhabitants, Oscar must find out who is good and who is evil before it is too late. Putting his magical arts to use through illusion, ingenuity-and even a bit of wizardry-Oscar transforms himself not only into the great wizard but into a better man as well.


As a massive fan of the original 'Wizard of Oz' movie starring the legendary Judy Garland, I was excited to see just what Sam Raimi's vision of the tale would be.  I was well aware that it would never live up to the quality of the original but this prequel had a good cast and a director that is known for bringing out some action packed and exciting movies.

So, my question is, what went wrong?

For some reason, the movie just doesn't gel.  It looks absolutely gorgeous, there is no argument on that front and the special effects are some of the best I have seen in a Raimi film.  However, it just seemed to be mostly window dressing.

The movie itself is a well paced fantasy movie with some truly magical moments but the dialogue really lets the excitement level of what should essentially be a good starting point for the 'Oz' mythos.  Some of the dialogue comes across as so banal that even the actors look bored and soul less delivering them.

Talking of the actors and actresses, there are some really strange choices here.  Rachel Weisz is absolutely spot on in her role as Evanora.  She just exudes menacing and delivers her lines with such a level of evil in her glee that she was positively mesmerizing.  However, alongside her, Mila Kunis really falls short as Theodora.  When she turns in to the trademark 'Wicked Witch', she doesn't come across as evil at all.  Instead she comes across as a petulant teenager who didn't get her own way and is having a tantrum because of it.  It's the same with James Franco.  Instead of coming across as someone trying to find redemption and make himself a better man, he is instead incredibly unlikeable.  Even when he does the right thing, he still feels a bit like an a-hole in places.

The special features here are most definitely the best part of the release.  There are some great behind the scenes bits and bobs here and while I wouldn't say that they're worth getting the Blu-ray for, they are still very interesting in seeing how they brought this movie to the big screen.

All in all, I didn't find this movie to be half as awful as some other critics made it out to be but at the same time, I did come away from it feeling quite disappointed.  I knew it wouldn't reach the massively high standard set by the Judy Garland original but at the same time, I honestly believed that Sam Raimi would be the man to bring us an exciting and well made movie that would entertain fans of the stories yet it just felt flat.  It looks amazing, I won't lie about that and the special effects are superbly used.  There are even some set pieces that really had the 'wow' factor but overall, it should have been much better than it is.  Shame really.