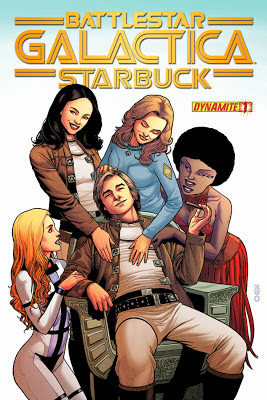 Tony Lee, author of ‘Battlestar Galactica: Starbuck’ and many more, has kindly popped in to the little slice of the Internet populated by Curiosity of a Social Misfit to talk to Patrick Challis about the new ‘Battlestar Galactica’ mini series exploring Starbucks life and much more.

PC:  Firstly, thank you Mr Lee for taking the time to talk to us here today.

TL:  Not a problem guys.

PC:  How would you best describe your writing style to the readers of the site who may not be familiar with your work?

TL:  Eclectic and varied with a hint of desperation and fear? Seriously though I don’t know if I have a ‘style’, I write what I would read, and hopefully my tastes are the same as many other out there. I’ve written spandex heroes, Victorian teenage sleuths, Time Lords, pulp heroes and American icons in my time, so I’ve never really stayed on one particular path. But I’d say my style is whatever the genre requires of it that day...

PC:  You’ve recently written the mini series ‘Battlestar Galactica: Starbuck’ for Dynamite Entertainment, a mini series that goes on to show Starbucks past and how he became the character so beloved to science fiction fans.   How did the collaboration come about?

TL:  I’ve known Nick Barrucci and Joe Rybandt of Dynamite for several years now and have worked with them on a couple of projects. When we were looking at other things to work on Nick mentioned that he was looking for something to enhance the Battlestar Galactica revival that Abnett and Lanning are doing and, as I’ve always been a massive fan of Dirk Benedict’s Starbuck, I suggested doing a ‘Year One’ style story, something that, in its process would show us some of the major characters from the show in their younger years, leading up to some kind of adventure that would tie into the first ever episode. What, for example, if Baltar was on the Council of Twelve because of something Adama did? Who was the person that got Starbuck onto a path of gambling and smoking when his best friend Apollo was so clean cut? All these questions were just begging to be answered in my mind, and Nick was happy to see my take on this.

PC:  Did you have to do a lot of research to get the characters right or are you allowed a lot of freedom to put your own spin on them?

TL:  Nick and Joe have given me a lot of freedom, but I personally believe that a lot of that was because they know I’m such a fan of the original series that I’d self edit to a higher degree than usual. Also, with this being set before the show, there’s a lot of continuity issues that go out of the window as we don’t have to set it within a particular period, or between certain episodes. That said, I love research, it’s a vital part of the process, and character research, if only to get the voice right is paramount.

PC:  Our site called the first issue of ‘Battlestar Galactica: Starbuck’ as a good slice of vintage style science fiction.  How would you describe it?

TL:  A labour of love, a ‘Year One’ for Battlestar Galactica, a literal ‘L’il Starbuck’ story!

PC:  You’re known for writing stories for well known franchises such as Doctor Who, Star Trek, Starship Troopers and now, Battlestar Galactica.  Do you find the fans expectations for your stories daunting at all?

TL:  Always. But that’s a good thing. The fear of letting them down means that I’ll do my best to keep my game raised. You can’t phone in a script for something like this, you’ll let down too many people. You have to ensure that only your best is used on the book, but then to be honest that’s a mantra you should use on everything you do anyway!

PC:  With the 50th anniversary coming up, what has been your favorite moment working on the Doctor Who comics?

TL:  Ah, there are too many to count! On a personal level, it’s the fact that I was a fan of Doctor Who and now I’m part of that world. Thanks to the conventions I’ve been invited to because of it, I’ve met people who, as a child I idolized. As for the stories, I’ve had an immense amount of freedom. I’ve had the Doctor and Santa save Christmas, the Doctor’s fought Jack The Ripper, he’s played football with Vikings... But I think the two favourite moments are firstly being able to create a twenty foot high Cybernetic Dinosaur companion called Kevin, and more importantly being able to do stories like THE FORGOTTEN and the current DEAD MANS HAND where I have all the Doctors together.

IDW have been very good to me, and people like Denton Tipton (the editor) and Chris Ryall (IDW head honcho) have been nothing but supportive.

PC:  You’re an amazingly prolific writer in the comic book and graphic novel world.  What would you say has been your best work?

TL:  There’s a few stories in Doctor Who that I’ve enjoyed, my Robin Hood and King Arthur GNs are stories that I’ve held for years, and I’d say both the Baker Street Irregulars series and the Harker GN are my two favourite works. Both are based on books that shaped me as a child – Harker’s also the only graphic novel sequel to Dracula ever to gain endorsement from a member of the Stoker family, which makes me very happy.

PC:  Who or what would you say has been the biggest influence to your career as a writer?

TL:  Again, too many to give out. When I started I had a lot of help from Mark Waid, Geoff Johns, Pat Mills, but before that I was a journalist and had editors that gave me advice. I think it was probably two people, a children’s book writer that came to my school when I was about 10 who made me want to write, and Terrance Dicks, who was the first author I actively hunted, thanks to his Doctor Who Target novelisations.

PC:  If you could give any advice to up and coming writers advice, what would you say to them?

TL:  It’s not an overnight situation, and if you haven’t got a spare five years to learn the craft and get nowhere while you’re waiting for your break, then may I suggest a different career. Too many people seem to think that they can decide to be a writer in January, have the DC gig by March and the movie out by December. It’s not like that. It’s nothing like that, really. It’s long, and hard, and you’re always writing but at the same time it’s the best thing in the world.

TL:  I have two GNs coming out in 2014 from Walker Books / Candlewick – the first is the third in my ‘Heroes and Heroines’ series, Messenger: The Legend Of Joan Of Arc, and the other is the second in my Anthony Horowitz ‘Ravens Gate’ adaptations, Evil Star. Apart from that, you’ll have to just wait and see!

Posted by Pat Scattergood at 10:08