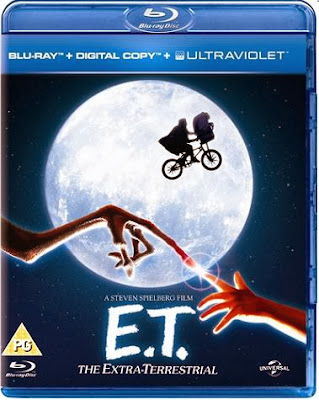 One of the much-loved classics of all-time and a masterpiece from award winning film maker Steven Spielberg, E.T. - The Extra Terrestrial is released for the first time ever in stunning high definition Blu-ray.

To celebrate the 30th Anniversary of this much loved classic, the picture and sound have been fully restored to give a stunning Blu-ray special edition. Loaded with all-new special features E.T. - The Extra Terrestrial is a must-own for all fans of high definition to give an out of this world experience.

A lost alien, three million light years away from home. A lonely ten-year old boy willing to take him home. Two lives changed by a timeless adventure and a friendship that knows no earthly bounds.

A captivating classic that will embrace everyone with its magic touch.


E.T. The Extra Terrestrial is one of the most beloved movies of all time and not just of the 1980's.  Loved by children when it first came out and loved by children now, I was extremely eager to get my hands on this special anniversary edition Blu-ray version of the movie.

Would the release do the Steven Spielberg justice or would be go the way of the 'Star Wars' movies and be diluted by the various releases and re-releases?

Well, let's just say, it started out as a classic and you know what?  It just got better.

The first thing I noticed was just how superb the transfer for both the sound and the picture looked.  It was as if the movie was made today and not over thirty years ago.  Whoever did the transfer did a truly incredible job.  The picture was crystal clear and the sound pitch perfect.

Movie wise, it's E.T. so we know what to expect.  What we get here is a superbly written, paced and acted family movie that will make you laugh, cry and absolutely warm your heart.

In a family movie, the acting is sometimes over the top in order to engage the younger ones that are watching but that's not the case here.  Instead, we have a very subtle movie and considering it's a movie that features an alien, that's a great result.  The writing doesn't insult the intelligence, instead just crafting a simple, heart warming story of a young boy making friends with a lost alien, who he then tries to help him get home.  The relationship between the two of them is utterly involving and beautiful in it's simplicity.

Performance wise, I can honestly say that I didn't think there was a bad one amongst them all.  That said, this movie belongs to one person and that's Henry Thomas as Elliott.  He plays the boy in such an assured way that you can't take your eyes off of his performance for the entire movie.  It can't be easy to act next to a puppet but Thomas does it in such a way that you really think that his character and E.T. are the best of friends and that the alien himself really exists.

Special features wise, fans are most definitely in for a treat here.  While not as jam packed as the re-release of 'Texas Chainsaw Massacre 2' from Arrow Films, there are still a hell of a lot of things here to more than hold your interest.  It was really great to see that there were some deleted scenes as well.  You could see why they were taken out but the fact that they added them in to the special features was a great and interesting addition.

All in all, this is a fantastic movie that really deserves to be seen by everybody.  The story is so sweet and heart warming that it will grip you from start to finish.  It even gripped my four year old son for the entire run time of the movie and you can't ask for more than that from a family movie.