Have you ever wondered what really happened to Atlantis? Did it disappear into the depths of the ocean? Or was there a fate, far worse waiting for it? For centuries after its disappearance, people have searched for the lost empire, but as of yet, the secret of its demise, remains unknown. Until now.....

The City of Atlantis was a rich affluent land, its people advanced, educated and peaceful. Protected by a battle-hardened army, its realm, Emperor and inhabitants, lived without fear from those who are jealous and misguided.

The Emperors warriors had battled against the odds, uncovered strange beasts and fought the legions of un-dead, from the dark under realms and won.  His armies, both male and female, each as deadly - showed no fear in the face of battle. But now, they must overcome their biggest plight in order to discover the whereabouts of Nepfalium. A sorcerer, darker than the blackest pits of hell.


Our story tells the tale of a curse, placed upon Atlantis, by a jealous rival, three years before it disappeared from human eyes forever.  And how the Atlantean people fought for their very existence.

This beautifully painted work of art will be 128 pages long - Written and created by Victor Wright (Exposed, The Lawless Ones, Light of Darkness, TEAL) and illustrated by the amazing Joshua Carrenca.  The lettering and layout will be provided by Brant Fowler.

What’s the plot? Set many years ago, Atlantis ruled the land and seas, a peaceful reign, by an Emperor loved across many nations. The Emperor rewarded his neighboring allies with riches from his harvests, and gold taken from battles in far away lands.  But the high priest known as Chinua, a jealous rival of the Emperor, takes exception, when he is refused the same wealth and prosperity for his twisted religion.   In a rage of anger, Chinua enlists the aid of a dark sorcerer know as Nepfalium.


Nepfalium is promised the souls of all of the Atlantean people and so places a powerful curse  to drive them deep under the sea.

Slowly, Atlantis starts to sink into the deep ocean.The whole process will take just three years and the lands, once so rich and fruitful, will disappear forever, unless the curse is lifted.

At first the Emperor laughs at the threat, having no belief that the very soils of his home, could slip in the waters.  But when a trusted biologist discovers the truth, the Emperor has to face the reality and sends an army of his strongest warriors to find the sorcerer and release the spell. 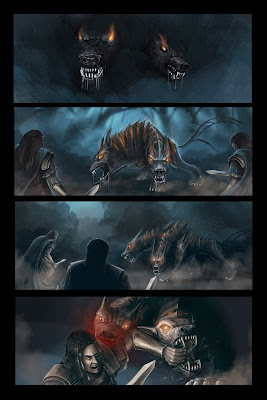 For more information on the campaign and the fantastic awards offered by the team click here!

Posted by Pat Scattergood at 11:06