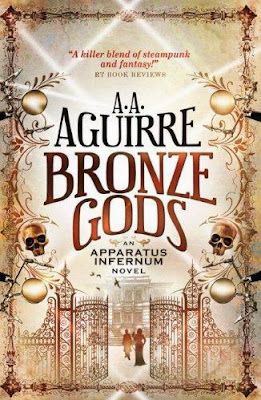 Book one of an exciting new cross-genre series.

Across the water lay the land of Hy Breasil, inhabited by the immortal Ferishers. Though they were few, they were divided, and when the mortal conquerors came they did not stand together. They had magic but the invaders were many, and after a bitter war, peace was only made through marriage. And thus the ten great houses grew, and the city of Dorstaad rose, and the Ferisher bloodlines grew thin. But there were some who still wielded the ancient magic…

Janus Mikani and Celeste Ritsuko work all hours in the Criminal Investigation Division, keeping the citizens of Dorstaad safe. He’s a charming rogue with an uncanny sixth sense; she’s all logic—and the first female inspector. Between his instincts and her brains, they collar more criminals than any other partnership in the CID.

Then they’re assigned a potentially volatile case where one misstep could end their careers. At first, the search for the daughter of one of the great houses seems straightforward, but when the girl is found murdered—her body charred to cinders by an intricate and deadly device—Mikani and Ritsuko will be challenged as never before. A ruthless killer is stalking the gaslit streets, weaving blood and magic in a lethal ritual that could mean the end of everything they hold dear…


I could easily sit here and write line after line about how much you will love this novel but to be honest, I don't really need to.  The novel itself is so strong that it be more than able to speak for itself so I'll keep it quick and simple.

The writing style is so free flowing that it almost feels lyrical in places.  It flows from scene to scene with such skill  that you can't help but get drawn in to the world that the author has created and end up just losing yourself in the story.  It's a cliched term to use but this really is a page turner of the highest order.  When I was reading it in order to review it for the site, it was a case of 'just one more page' and before I knew it, the book was over.  That hasn't happened to be for a very long time.

The world that the characters inhabit is so well thought out and fleshed out that it's almost as if the world itself is completely real.  Fantasy mixes with urban settings with such success that it feels like it's happening in front of your very eyes.  The scenes were playing out in my head as if the story was a movie and it's that cinematic feel that raises this high above the plethora of steam punk books that seem to be being released every day.

One of my favorite mystery / crime writers that combines twists and turns in a steam punk style setting is George Mann and here, that style of twists and turns are pushed to the forefront with aplomb.  Aguirre, a husband and wife team writing together under one name, really fill the story with a hell of a lot of twists and turns to such a degree that I couldn't wait to see what was going to be revealed next.

The thing that I liked the most is that the ending more than lived up to the brilliant work of the rest of the story.  It managed to do two fantastic things that a lot of steam punk books seem to fall down on.  It gave closure to the story in this novel yet at the same time dangled the hope in front of the reader that there was going to be another book in the series.

Personally, I really am hoping that there will be another book in this series as I thought it was absolutely superb.  While it doesn't take George Mann's crown of being the master of steam punk style mysteries, it comes very close and that's not an easy thing to do.