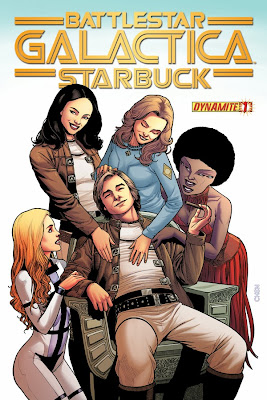 See how Starbuck became a Viper pilot, his first meeting with Apollo and why Adama treats him like a son - as he pieces together what really happened the night he was orphaned, and the name of the traitor who ordered it...


As a fan of the original 'Battlestar Galactica' and the revamped version, I was quite eager to read this four issue mini-series showing the back story of the original Starbuck.  Dynamite Entertainment have always had a great knack for tie in titles that keep the feel and atmosphere of the show or film while still putting their own stamp on to things.

This one is no different.

The writing really hooks in the reader to see just how Starbuck became the hero he became in the show itself.  From the events that led to Adama helping him grow up right up to when he joined them in the fight against the Cylon's, there were so many possibilities for stories.

Here they take a look at his early years and how he met Adama.  There are some great moments that leave a lot of questions for the next issues to answer.  What happened on the night he became an orphan?  Was there someone in their midst that sold them out?  The questions were done in such a way that it left me wanting to get to issue two quicker so that I could see where the story was going to go.

Art wise, I loved the way the artist captured the look of the show.  In fact, the art in the comic has a bit of a vintage feel to it, which is a great way to feel like it really is part of the television series that we all know and love.  The action scenes involving the space fights and especially the Cylon's themselves look superb.

Talking of art, I really liked the cover to this issue.  It has the great vintage look of the issue itself as well as doing a fantastic job of showing the Starbuck of the show as the ladies man that the fans remember him being.

All in all, if you are a fan of the original 'Battlestar Galactica' then this, the first issue of a four issue run, is a fantastic purchase as it will fill in the blanks of Starbuck's past.  If you're not a fan then I would honestly still give it a read because it stands alone as a good slice of vintage style science fiction.