A1: The World's Greatest Comics Review 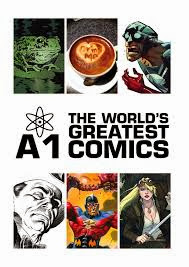 From super-soldiers to avatars of heavenly vengeance... from piles of sentient garbage to the cream of latte art... from classics of literature given a new lease of life to tales of blistering freshness...

A1: The World's  Greatest Comics is a delicious collision of genres and styles, where comic creators of the past, present and future come together to show that creativity has no limits!

Grab yourself a cup of coffee and sink into its warm embrace!


A1 is a title that has a whole shed load of history behind and after relaunching, Atomeka teamed up with Titan Comics to bring the anthology title back to life from the head.

I have to admit that this title is really hard to explain and to review without giving anything away about the goodies inside because of the fact that it's so varied.  That fact is also one of it's biggest weaknesses as well.

The best way to describe this collection would be bitty.  It's not bad enough to be called hit and miss but there were a few stories that were disappointing to the point where I expected a little better from the people involved.

There was one story that was equally fantastic and frustrating and that was the story by Sandy Plunkett because that story was brilliant, had a great atmosphere and some great twists in it.  However one of the things that annoyed me the most and really took me out of the story is that it couldn't make up it's mind about what the time period it's set in was.  The art and the story make it seem like it's set in the past but some of the language was modern and felt massively out of place.  Sayings such as 'chill pill' were used and it took me out of the story and on one moment even made me say "what?" out loud.

The art throughout the collection, while really varied, was great.  The best was the art by Simon Bisley but that's no surprise there but the classic style of Jack Kirby was a great addition.  You can never have enough Jack Kirby in your life.

All in all, I wouldn't agree with the collection having the title of 'World's Greatest Comics' but there really is something for everyone in this collection.  If you can skip over a couple of slightly disappointing moments in the stories, 'Tales of Old Fennario' and the spelling mistakes in 'Odyssey: A Question of Priorities', then this is a pretty good collection to pick up.  It's the sort of collection that is superb for someone who wants to dip a toe in to the comic book world or for someone that just wants a bit of variety in their reading.