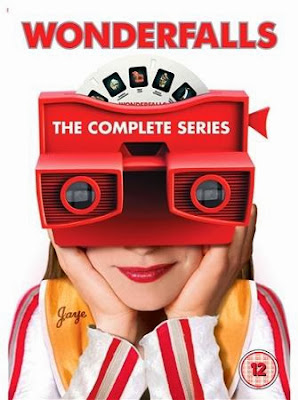 From the producer of Angel and Firefly and the creator of Dead Like Me and Pushing Daisies comes Wonderfalls.

The show centres on Jaye Tyler (Caroline Dhavernas), a recent University graduate, who holds a dead-end job as a sales clerk in a Niagara Falls gift shop. Jaye is the reluctant participant in conversations with various animal figurines- which direct her via oblique instructions to help people in trouble.

'Wonderfalls' is one of those kooky style that is so off beat and different that you can't help but get drawn in to the world that the characters inhabit.  It was the same with the show 'Pushing Daisies', which strangely also had Lee Pace in.

Sadly, before this series could really take off and fly Fox cancelled it.  Yeah, I was shocked too that they would do such a thing.  Cough cough Firefly cough cough.

One of the things that I loved the most about the series was the fact that it was a television series that tried so many things that wouldn't normally be tried in a series and tries them all.  In fact, there are so many times that this show shoots out of the real world and in to the realm of the truly surreal yet the intelligent writing makes it all seem plausible.  You can most definitely tell that this is created by the creators of 'Dead Like Me' because they use some of the same little tricks but here, 'Wonderfalls' is a show with it's own  unique voice.

The cast is utterly superb.  The writing is so intelligent that they give the characters such separate personalities and weight to their actions.  That would be all for nothing if the cast wasn't up to the massive task of making those personalities come to life but that's exactly what they do there.

The great William Sadler is here, you have the sadly under rated Lee Pace from 'Pushing Daisies' but best of all you have Caroline Dhavernas as Jaye Tyler, who gives the character such a world weary and cynical edge that she comes across as a live action Daria.  There are so many layers to the character that she is a fantastically original and complex character that just feels at home in a complex and multi-layered series.  I just wish it could have lasted for more than one series.

If you like series such as 'Pushing Daisies', 'Dead Like Me' and other such shows then you are going  to love this unique, one of a kind series that will have you laughing manically and being gripped at the same time.  Great performances and writing make this a fantastic purchase.

Posted by Pat Scattergood at 15:11