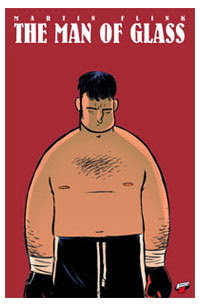 What is the tragic connection between the young boxer who has it all, love, friends and a promising career and the sad old man who drinks cheap beer in the park and carries his belongings in two plastic bags?

This heart wrenching tale shows how a single mistake can change everything if you take an unlucky chance.

I honestly have no idea how to describe this wonderfully written and drawn graphic novel as it is one of the most touching and heart wrenching reads that I have read for a while.

While 'What Happened to the World's Fastest Man?' was heart wrenching in it's writing, this story is absolutely heart breaking.

The simple story here is one of sadness and grief.  What do a young boxer with a promising career and an old man carrying his cheap alcohol in a plastic bag have in common?  Believe me, when you find out it will move you to tears.  The story of grief, attempted retribution and regret is written with minimal dialogue, which is a very brave move and it's that approach that makes this story so incredibly powerful.

It's pretty much all told from the facial expressions and flashes of what happened.  The strong artwork by Flink really pushes the emotions of the characters without once feeling melodramatic.  You really can see the hurt and the pain that these characters are going through.  It's so effective that you feel completely involved in their lives through out the book.

This release from Accent UK is a complete must read.  It's really that simple.  The story told with minimal dialogue is something that will have you talking and thinking about it long after you have closed the book.  Just be prepared to have some tissues handy for when you read it.