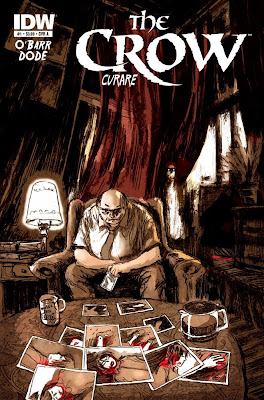 Retired Detroit police officer Joe Salk was a good cop, but after a little girl's murder, his wife left him because of his obsession to find her killers.

Now completely alone, his need for revenge might just be helped by the young victim, returned and empowered by the spirit of vengeance, the Crow…


As a massive fan, although my girlfriend would probably say fanatic instead, of the original 'The Crow' comic book and movie, I was massively excited to get my hands on this graphic novel to read.

After read the mini series 'Skinning the Wolves' by O'Barr, I was massively impressed with how he set that one during the Holocaust without falling in to melodramatics.  This one would take an equally dark and disturbing story and attempt to do the same.

Here, O'Barr has crafted a brilliantly written and heart wrenching tale of the evil that men and women are more than willing to inflict on one another.  In this case, the murder of a little girl and a detective who is haunted that he hasn't solved the case.

The story of the detective struggling in such a way isn't original in the comic world but O'Barr manages to make the story his own entirely.  The way he portrays the man as being completely broken, lost to grief and guilt and trying to drink himself in to an early grave is masterful.  I couldn't put the story down and even though I'd already read the tale in comic book form, the graphic novel version still gripped me as if I had never read it before.

The intelligence of the writing really is an improvement on 'Skinning the Wolves'.  As much as I loved that series, this one blew it out of the water for me.

However that's not where the real strength of this release comes from.  That's the superb art work by Antoine Dode.  I wasn't all that aware of Dode's work before I saw it here but I'm most definitely going to be checking out more.  His painted style artwork gives the entire story a slightly otherworldly feel to it, as if it's reality but not quite.  I felt that this style really added to the emotion that O'Barr's writing brought forth and at the same time kept the writer hooked on to what was going on.  The artwork was so beautiful that while harrowing in places, I couldn't take my eyes off of the panel work.

It's the same with the cover art.  The picture really tells the story of the detective in one swoop with some equally as fantastic art.  The way Dode has drawn the detective here really shows just how far he has fallen without giving any of the story away.

If you are a fan of the series of 'The Crow' series or a fan of James O'Barr's work then this is well worth picking up.  It doesn't reach the height of the original but it has emotional depth and the art by Dode makes the book worth buying just for that alone.

'The Crow: Curare' is available to buy from December 3rd
Posted by Pat Scattergood at 14:59