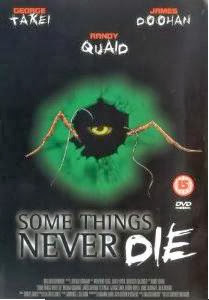 When a local girl is attacked while swimming in the town lake, the examination reveals that she was the victim of a mysterious creature, unknown to science.

As tension mounts several more townspeople are infested by a strange form of insect larva. Soon the town is overrun with mutant insects and rampaging bugs.

Genetic scientist Dr Fujimoto must trace the creepy creatures to their source in an attempt to save the town from total annihilation.

Some Things Never Die was released as Bug Buster in the USA but either way it's an enjoyable and cheesy 'creature feature' that really harks back to the B Movie glory days of the 40's and 50's.

One of the things I really liked as well was the simple fact that it didn't take itself seriously in the slightest. The cast, that includes a very young Katherine Heigl, really look like they had a hell of a lot of fun filming this. Also the cast has some really good people for fellow nerds to look out for as well.

In particular, the legendary George Takei and the late and great James Doohan, reunited after their time on the original Star Trek series as a genetic scientist and a gruff small town sheriff. Doohan plays the sheriff with a real John Wayne style to the character and is one of the sheer highlights of the movie.

However, for me, George Takei is the absolute highlight of this movie giving a great performance as Dr Fujimoto. Somehow he manages to be a deeply serious scientist all while giving a knowing nod to the audience.

Randy Quaid gives his normal OTT performance as the bug buster of the American title, which would normally be annoying yet it fits this movie brilliantly and adds to the fun nature of it.

The kills are pretty inventive for this sort of movie and also the special effects, while not groundbreaking are tons better than Mega Piranha.

All in all, if you want to watch a movie that is a hell of a lot of fun to watch as well as being exciting, you could do a lot worse than Some Things Never Die.

Plus it has James Doohan and George Takei in it. What more could you want from a movie?

If you love the creature movies massively popular in the 1940's and 50's then you will absolutely love this.  It really harks back to those movies and really looked like the movie was a hell of a lot of fun to film.  The cast really do put their all in to it but like I said earlier, Takei and Doohan steal the show for me.  Well worth picking up.

Posted by Pat Scattergood at 11:01