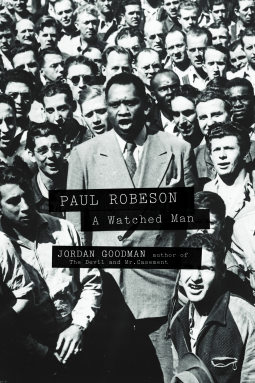 In his heyday, Paul Robeson was one of the most famous people in the world; to his enemies he was also one of the most dangerous. From the 1930s to the 1960s, the African-American singer was the voice of the people, both as a performer and as a political activist who refused to be silenced.

Having won fame with hits such as “Ol’ Man River” and thrilling London and New York theatregoers with his legendary performance in Othello, Robeson established himself as a vocal supporter of Civil Rights and an opponent of oppression in all its forms. He traveled the world, performing in front of thousands to deliver a message of peace, equality and justice that was as readily understood on the streets of Manchester, Moscow, Johannesburg and Bombay as it was in Harlem and Washington, DC.

The first new work on the leading African-American singer for over a decade, Paul Robeson: A Watched Man is a story of passionate political struggle and conviction. Using archival material from the FBI, the State Department, MI5 and other secret agencies, Jordan Goodman reveals the true extent of the US government’s fear of this heroic individual. Robeson eventually appeared before the House Un-American Activities Committee, where he spiritedly defended his long-held convictions and refused to apologize, despite the potential damage to his career.

Paul Robeson was an insanely talented man, a man who was the living embodiment of the saying 'larger than life'.  He was also an activist for equal rights and that came very close to ruining him.

This book attempts to take a look at the man who would go on to  put everything on the line to fight for what he thought was right despite all the roadblocks thrown in his way by his detractors.

To be honest, the incredibly tough subject is both it's major strength and it's downfall.  There is little in the way of information about the man himself and only a little mention of his career as well.  If you are looking for a book about that side of the man then you would most probably be better off looking elsewhere.

What this book does do very well is talk about the constant battle that Paul Robeson fought despite his growing fame and well respected talent.  Even though he was getting invitations to sing in countries all over the world, movie offers for some of the biggest studios in Hollywood, there were still places he wasn't allowed to go just because of the colour of his skin.

The look in to this era of history is very well done by Goodman as he really manages to paint the scene for the reader.  I really was impressed with just how he wrote about Robeson's personality with respect to his battles to gain equality for all races.  Robeson in fact comes across as an extremely brave man and that is really put forth by Goodman yet he also writes it in such a way as to not make Robeson sound like a martyr either.

All in all, this is a very good look at Paul Robeson and his battles not only with equality but with certain arms of the American government.  There are some absolutely fascinating moments written about the man behind the headlines but I feel that Jordan Goodman missed a chance to make it more complete than it is.  His life and career aren't really talked about that much and that hurts the book a bit because it was due to his fame and his upbringing that he had the power and the personality to be able to be strong enough to stand up for the things that he thought were right.

Still worth picking up if you are a fan of Robeson himself but if you're looking for a book about his career then you may be better off getting a different book.