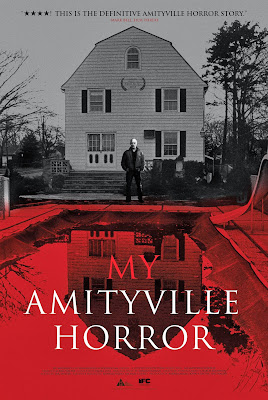 Written and Directed By Eric Walter

For the first time in 35 years, Daniel Lutz recounts his version of the infamous Amityville haunting that terrified his family in 1975.

George and Kathleen Lutz's story went on to inspire a best-selling novel and the subsequent films have continued to fascinate audiences today. This documentary reveals the horror behind growing up as part of a world famous haunting and while Daniel's facts may be other's fiction, the psychological scars he carries are indisputable.

Documentary filmmaker, Eric Walter, has combined years of independent research into the Amityville case along with the perspectives of past investigative reporters and eyewitnesses, giving way to the most personal testimony of the subject to date.

When I heard about this documentary, I honestly couldn't wait to get it in to the DVD player and settle down to watch something that was hopefully going to be an interesting yet personal take on the alleged haunting.

Well, that's not what we really got here.

Instead we get an inherently flawed documentary that doesn't turn up any new information at all, is full of bad editing and has at the heart of it, a man with some obvious mental scars and problems.

One of the first things that struck me was how troubled Daniel Lutz obviously is.  In fact, in places, he comes across as quite immature and childlike.  If he gets a question that he doesn't like, he either goes very aggressive and stomps off or he gives such vague answers that he doesn't really answer the question at all.

Another thing that stuck me was the extremely  random and, in all honesty, bad editing decisions.  At one point during the documentary, he drops the bomb shell that he tried to kill his step father and it then cuts to a clip of him in sunglasses, playing the guitar.  There was no followup or no probing in to the question, just that cut to him playing guitar.

There were however some parts that I did really like.  One of these is the fact that while Lutz himself is definitely the subject of the documentary itself, they covered all of the bases and even interviewed the people that thought the whole haunting was made up entirely.  It's always a surprise to find a documentary so willing to show the two sides of the story so clearly.  It's just a bit of a shame that the rest of the documentary didn't really live up to that promise.

If I'm completely honest, I found this documentary hard to watch and a bit unsettling.  Not because it was spooky, it really wasn't, but because I  felt like I was watching a man legit descending in to madness.  I felt really sorry for him in a way because the mental scars and problems are there for everyone to see.  It's blindingly obvious that he has some problems and that he needs help.  He does come across as honestly believing what he is saying and I think he really does believe it.  It's just a shame that his siblings didn't want to be interviewed for this as it would have been nice to see their side of things.

One only really for the 'Amityville Horror' collectors out there.

'My Amityville Horror' is available to buy from October 28th 2013.

Posted by Pat Scattergood at 10:05