Kingdom of the Spiders DVD Review 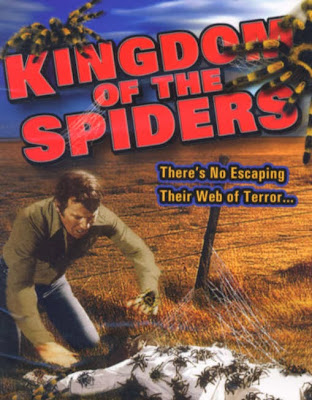 Investigating the mysterious deaths of a number of farm animals, vet Rack Hansen discovers that his town lies in the path of hoards of migrating tarantulas.

Before he can take action, the streets are overrun by killer spiders, trapping a small group of towns folk in a remote hotel.

In the late 70's and early 80's, movie fans were pretty much treated to a different 'animal on the loose' movie every other week.  There were films about Sharks ('Jaws'), Bees ('The Swarm') and much more.  Most of them have gone on to be cult classics and others have faded in to obscurity.

'Kingdom of the Spiders' is one of those cult classics that everyone appears to remember watching but then can't really tell you much about the movie itself.

Well, it's not on DVD and not a moment too soon.  What we have here is a taut and sometimes claustrophobic thriller with some good to great performances from the cast.  The shooting style of the movie really makes good use of the spiders themselves and of the shadows, especially in the final third of the movie.

The plot is wafer thin in places but this is a movie about killer spiders taking over a town, not 'Schindler's List', so there really is no point expecting a massively intelligent movie.  Instead we have a movie that really shouldn't work as well as it ends up doing.  It's gripping yet subtle pace really builds up the tension tenfold and really creates a tense atmosphere.

Cast wise, we get some great performances.  William Shatner, not one for the most subtle of performances, actually gives quite a restrained performance here and ends up having a slightly arrogant yet likable character that you wanting to succeed.  This helps the movies albeit heavy handed message about the over use of insecticides.

All in all, this is definitely a movie to pick up if you can look past the sometimes hokey dialogue.  I mean come on, it was the 70's after all.  We have a wonderfully restrained performance from Captain Kirk himself, William Shatner, and a great dread filled atmosphere that leads to some genuinely creepy moments.  What more could a 'creature feature' fan want?

Posted by Pat Scattergood at 15:40