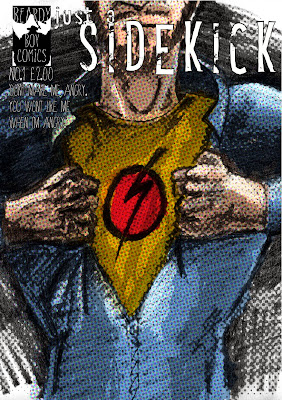 A continuing adventure series experimenting with a different genre each issue.

After attending this years 'Nerdfest' convention in Nottingham, I was drawn to the art on this comic book and the rest of the art on display at the 'Beardy Boy Comics' table so I treated myself to the first issue of this series.

A comic book series featuring a different genre each time seems like the writing might in theory not work as well as it would do if you were getting a chance to get to know the characters with each issue.  Yet with that said, Kel  Winser's writing really takes on a personal level and you find yourself really drawn in to the story.

The blurb says that this is an semi-autobiographical and the stark art work really works well with the writing.  They really do go hand in hand.  The way Winser really draws you in to the main characters world and his cynical, maybe even bitter, look at the world is so well done that you are actually really disappointed that the issue ends and what an ending it is.  I found myself just staring at the page wanting to know what happened to the character.

If you are expecting a superhero, knock down and drag out story then you are out of luck.  If you want an intelligent and involving story with some fantastic artwork then this is the title for you to pick up and check out.