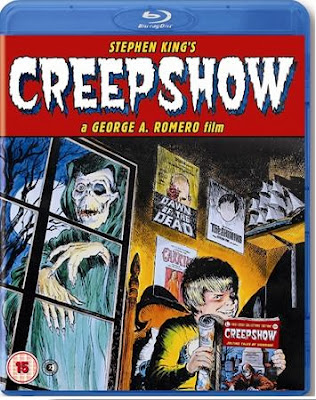 Written By Stephen King
Directed By George A. Romero

A murdered man emerges from the grave for Father's Day cake.

A meteor's ooze makes everything... grow.

A professor selects his wife as a snack for a crated creature.

A scheming husband plants two lovers up to their necks in terror.

A malevolent millionaire with an insect phobia becomes the prey of a cockroach army.

Stephen King. George A. Romero.  Two names that every horror fan should know.  What do you get when you combine them?  You get 'Creepshow'!

'Creepshow' is a horror anthology movie that anyone that is a fan of 80's horror will know very well and now the classic is finally available on Blu-ray but is it worth picking up.

Well horror fans, that is a rather pointless question.  Of course it's worth picking up, it's 'Creepshow' and has been written by Stephen King and directed by the king of the zombies himself, George A. Romero.

The five stories here are very well done with some superb make up effects by the legendary Tom Savini that, even now, look absolutely brilliant.  It's hard to believe that this movie is over 20 years old.  Makes me feel quite old actually but anyway back to the review.

The stories themselves do vary in the tale they weave but they are most definitely Stephen King stories as his trademarks of wit, cynicism and the underlying feeling of something spooky being about to happen are all there and accounted for.  However, the writing wouldn't mean a thing without a great cast to back it up, hence why some King adaptations end up being awful and some end up being fantastic.  This cast however make it the latter.

You have some absolutely household names here and they are all great across the board.  Normally with anthology movies, they can be a bit hit and miss but here, they're so good that I can honestly say that there isn't a weak link amongst them.  You even get an appearance by King himself!

The special features here are spot on for the set yet I can't help but want a little bit more but maybe that's me being selfish after being spoiled so much by the 'Texas Chainsaw Massacre 2' Blu-ray that I reviewed a little while back.  The best of these by far is the part 'Behind the Screams With Tom Savini' but the actual making of documentary is very interesting as well, offering quite a good look at the making of an 80's classic.

If you are a fan of 1980's horror movies then this has to be in your collection.  Not only do you get the classic anthology movie but there are also some great special features to cast your beady looking eyes over and what more could a horror fan want?