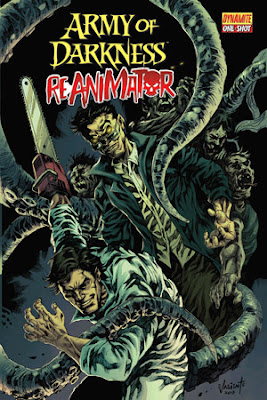 Ash is hurled into an American graveyard in the 1920s and meets an intense young doctor named Herbert West.

If the name sounds familiar, West's obsessed with reanimating the dead at any cost. But he just can't seem to find corpses that are fresh enough.

It's H.P. Lovecraft's New England - and his bizarre original short story as the source material.


Army of Darkness having a crossover with Reanimator is a story  that I didn't honestly think I would see or think it would work because the styles of story were so vastly different.  Well, those folks at Dynamite Entertainment sure proved me wrong.

Their crossover comics are known for being different, exciting and working no matter what characters they try to combine.  In fact, I would even go so far as to say that I'm yet to read a crossover by Dynamite that I haven't liked.

This title definitely keeps that momentum going and then some.  Herbert West, from 'Reanimator', meeting up with Ash really works in a bit of an 'odd couple' kind of way.  It's here that the writing teams up really well with the art because Ash's trademark quips are all here but the way the artist shows it winding up West is fantastic because that's when they really used some great facial expressions in the art.

While the 'Vampirella' special was a bit let down by it's ending, this one doesn't have any such problem, in fact, it grabs you from the very first page and keeps hold of you until the ending.

Writing wise, this crossover manages to be hilariously yet darkly comedic yet at the same time action packed.  Rahner really manages to keep the qualities that make the Ash character so popular and translate them on to the page.  That's not to say that West doesn't hold up his end of the bargain because he does.  He's pretty much the ying to Ash's yang in this story and that helps the action to gel together.

The art here is spot on.  One moment bloody and action packed, the next dark with a feeling of dread running throughout.  I love it when an artist is able to convey so much with just a facial expression or a god use of shadows and that's what we get here.  When the action picks up and it all goes to Hell in a hand basket, the art more than keeps up.

Cover art is done by Randy Valiente and looks fantastic.  I would even go so far as to say that I like the cover so much that I wouldn't mind getting it up on my wall because it  was effective in that it both got me excited to read the comic book itself as well as looking superb.

All in all, if you are a fan of either franchise then this is most definitely a title well worth picking up.  The writer does both of them justice and really gives both characters their own entirely separate voices and  personalities.  As a bonus for fans, there is even a reprint of 'Reanimator #0' after the main story so that makes it even more of a good purchase for the fans.