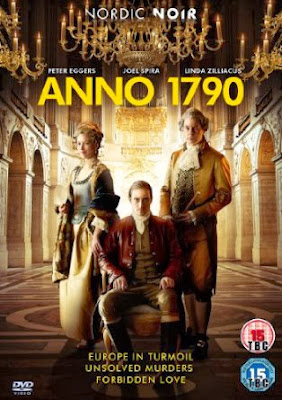 Anno 1790 is an innovative take on the Nordic Noir crime drama genre in which the hero, Daadh, is a controversial surgeon and police commissioner who uses unconventional means to solve murder cases during the Age of Enlightenment.

It is Stockholm, 1790,  and Europe is in turmoil after the French Revolution - a beacon of hope to the freethinkers across Europe, and a great threat to the reactionaries and those in power.

Daadh observes the ever-changing world around him - a city where tumbledown buildings stand alongside stately manors, and whores and beggars walk the same streets as rich merchants and noble women.

The murder cases and the methods of solving them differ from those of our time.  But the motives stay the same: revenge, greed, love jealousy and politics.

Nordic crime shows have become all the rage recently and rightfully so.  There have been some absolutely fabulous ones over the years so it's absolutely great that they are finally coming to the forefront of the television world.  We've had such quality shows such as 'The Killing' that we're practically spoiled for choice.

Does this one live up to the groundwork set by such shows?

Most definitely yes.  What we have here is a very well written and intelligent series that manages to juggle loads of different genres without feeling disjointed.  We have the historical settings that are so beautifully shot here that you can sometimes lose yourself in sheer beauty of the scenery itself.  We have the twists and turns of a quality crime thriller.  We also have some great moments of political machinations that each little thread of plot weave together  in such a subtle manner that when you get to any of the reveals that it comes as a shock to the viewer.

I'd be remiss if I didn't mention the superb performances by the cast, the best of these being Peter Eggers as Daadh.  With him being the main character, the series would either soar or crash and burn depending on his performance but here he injects the character with so many layers that I can't wait to get to a second season to see just how the character will grow even more.

If you are a fan of Nordic thrillers or even just crime thrillers in general then this is most definitely a series well worth picking up.

'Anno 1790: Complete First Season' is available to buy from October 28th
Posted by Pat Scattergood at 12:45