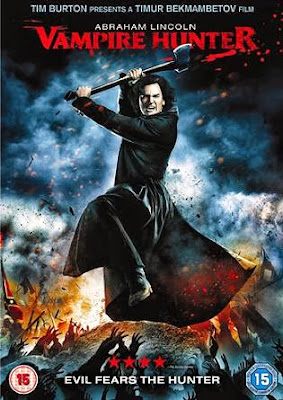 Benjamin Walker turns in a killer performance as Abraham Lincoln, who must risk the presidency, his family and his life to protect America from bloodthirsty vampires. Lead by the diabolical Adam (Rufus Sewell), the vicious creatures plot to create a nation of their own - the U.S.!

Thrust into an epic fight against the hideous undead killers, Lincoln must rely on those around him. But it's unclear who he can trust in this white-knuckle adventure that's ablaze with plot twists, blood-pumping action and spectacular effects!

With a name like 'Abraham Lincoln: Vampire Hunter', you pretty much know what to expect.  A cheesy 'B' movie right?  Well, what would you expect if the director  was the same man that brought to you the action packed and frenetic movies 'Wanted', 'Nightwatch' and 'Daywatch', Timur Bekmambetov?

Well what we end up getting is a completely rediculous, massively over the top but strangely entertaining movie full of the frenetic action sequences that  Bekmambetov is known for.

I honestly can't comment on if this is close to the novel or not as I haven't read it but the movie itself is full of some interesting ideas and set pieces.

The best thing to do is to pretty much switch your brain off as I'd class this as a 'popcorn' movie only with blood and gore.  If you like your blood and gore in slow motion 'Matrix' style scenes then you are in luck because there are a hell of a lot of those sorts of scenes.  While they are well done, by the end of the movie they did seem to be a little to be a little too much.  That said, there's a fantastic ending involving a train but I won't spoil it for you here but the special effects were fantastic.

There were only two parts of the movie that actually disappointed me.  One of these is the training part of the movie involving Lincoln learning how to survive while hunting the vampires.  This, in theory, should be an important part of the movie yet it's given a little under 3 minutes and all of a sudden Lincoln is a bad ass fighter.  Another thing that bugged me is that near the end, Lincoln's wife's character does a complete 360 from quiet woman to crack shot with a rifle.  I know it's not exactly a movie that's meant to be taken seriously but that just reeked of lazy writing.

Aside from those flaws, this was a very enjoyable yet utter rediculous movie that is a hell of a lot of fun to watch.  There's even an uncredited appearance from the always fantastic Alan Tudyk so what more could you misfits want?

Posted by Pat Scattergood at 14:10